The legacy of the renowned Gaffney High School coach and educator has a permanent home at Limestone thanks to a $4.1 million gift from Jerry Richardson, who was in attendance for the dedication ceremony of the Bob Prevatte Athletic Complex on April 14, 2018. Prevatte was Richardson’s high school football coach in Fayetteville, NC and the two have remained life-long friends.

Sculpted by artist Todd Andrews of Grass Valley, CA, the bronze statue features a kneeling Prevatte measuring over eight-feet tall. It was delivered by truck and installed two days before the dedication ceremony. Two members of the Limestone Athletics Department pulled away a large blue nylon cloth to unveil the statue Thursday, and the crowd in attendance stood to its feet in joyful applause.

“One of the many goals we had for the Bob Prevatte Athletic Complex was to make the statue of Coach Prevatte the focal point of the true community entrance into our athletic facilities,” said Mike Cerino, Limestone’s Vice President for Intercollegiate Athletics. “What better way to welcome residents of Gaffney and Cherokee County to our campus than to have them greeted by a larger-than-life statue of the larger-than-life icon Bob Prevatte? From the beginning, our objective was not to place the Bob Prevatte statue in the middle of the complex, but to have it out front here at this community entrance so that it would be easily assessable by the local residents and all of those who know and love him.

“It serves as the true centerpiece of the Bob Prevatte Athletic Complex and it will immortalize forever a legendary man both on the playing field and in the classroom,” he added. “This magnificent bronze statue is the first of its kind in our area, and no one is more deserving of that honor than Coach Bob Prevatte.”

The founder and former owner of the NFL’s Carolina Panthers, Richardson has called Prevatte a significant influence upon his character and his eventual success.

In addition to the statue and new entrances and signage, the Prevatte Complex is providing aesthetic enhancements and many new elements to the campus. Some of those include a new artificial turf practice field, permanent seating at Saints Field (which hosts lacrosse, soccer, and field hockey), community gathering spots, decorative fencing, and more. The campus connector walkways and a bridge physically connect the academic portion of Limestone’s property to the athletics complex.

“If you notice, this striking statue of Coach Bob Prevatte is not on a pedestal,” noted Dr. Darrell Parker, President of Limestone University. “That was no accident. It was by design. Because those who know and love Coach Prevatte have told so many of us endless stories about how – no matter the amount of success he enjoyed in the game of football – Coach Prevatte not one put himself on a pedestal. 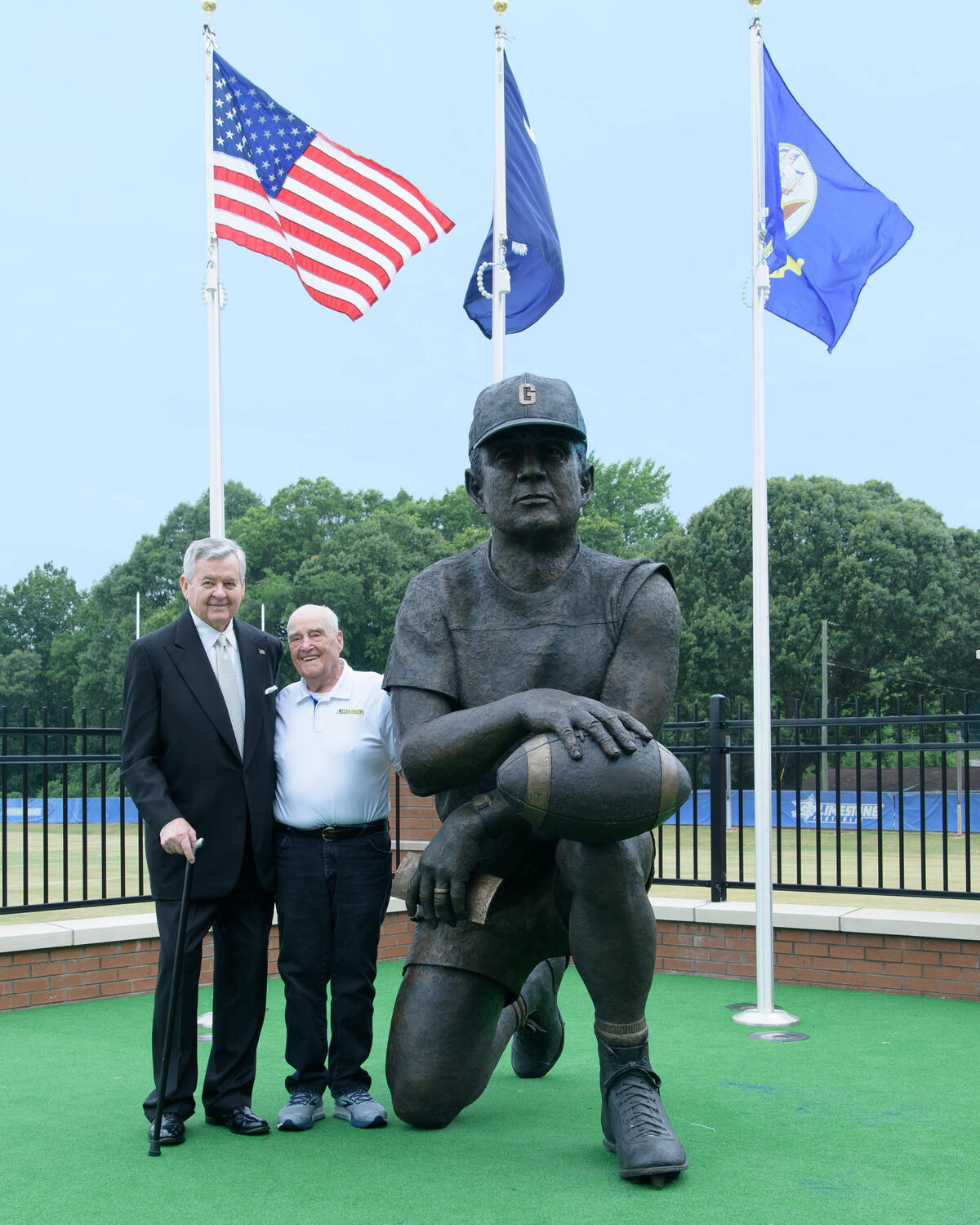 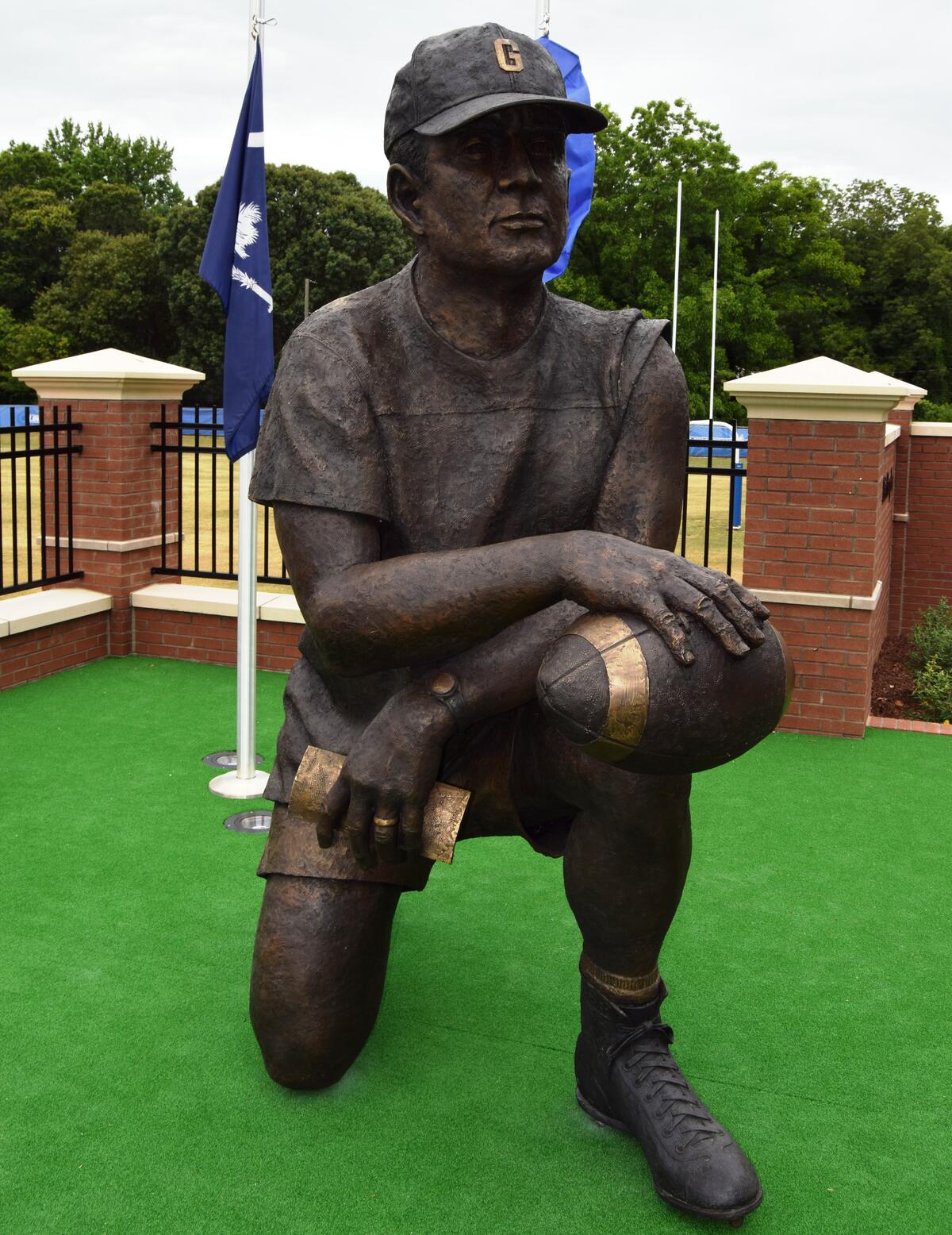 “To him, it was never about the wins and losses,” he added. “It was about building young men of great character. And because of the integrity he instilled in his players, the record-breaking wins and the championships just kept coming. The same success he found as a player and a coach carried over to his role as an educator and later in life as a businessman. This will forever be a place where the people of Gaffney and Cherokee County, former players, fellow educators, loved ones, and friends can walk up, take a photo, and reflect on what Coach Prevatte has meant to each of their lives. This will also be a place that for generations – as we have promised Mr. Richardson – others can come and learn about the legacy and the honor of the one and only Bob Prevatte.”

Through a gift by Richardson at the time, Limestone’s baseball field was named after Prevatte in 1988, and following extensive renovations, the field was re-dedicated to Prevatte in 2015.

Richardson credits Prevatte for a recommendation that helped earn him a football scholarship to Wofford in 1954. Richardson ultimately broke several Wofford records as a wide receiver and become an Associated Press Little All American. He was drafted by the NFL’s Baltimore Colts and was the team’s Rookie of the Year.

After six years as an assistant in North Carolina, Prevatte became the head coach at Gaffney High in 1956. Prevatte’s GHS football teams won five AAA state championships and he was named the state’s “Coach of the Year” four times. Prevatte never had a losing record during any of his 14 seasons leading the Indians’ football team, compiling a Gaffney football coaching record of 129-29-11 before retiring in 1969.

Prevatte, who also coached baseball at Gaffney, was selected as the head football coach for the North-South All-Star Game in 1959 and the Shrine Bowl of the Carolinas in 1965. He was tabbed as a Shrine Bowl assistant coach in 1960.

Previously serving as a teacher and assistant principal at Gaffney High, and was once recognized as “Teacher of the Year,” Prevatte was named Principal at West Junior High in 1968. It was that year that Granard High School and Gaffney High School merged as part of school integration in Cherokee County. The former Granard High School building was re-named as West Junior High, and Prevatte was named the Principal to help lead the new school’s transition through the integration process.

Hired by Richardson in 1971, Prevatte had a successful career in management at Spartan Foods, the corporation that became the nation's largest Hardee's franchise. He was named Executive Vice President of the corporation before he retired in 1987.