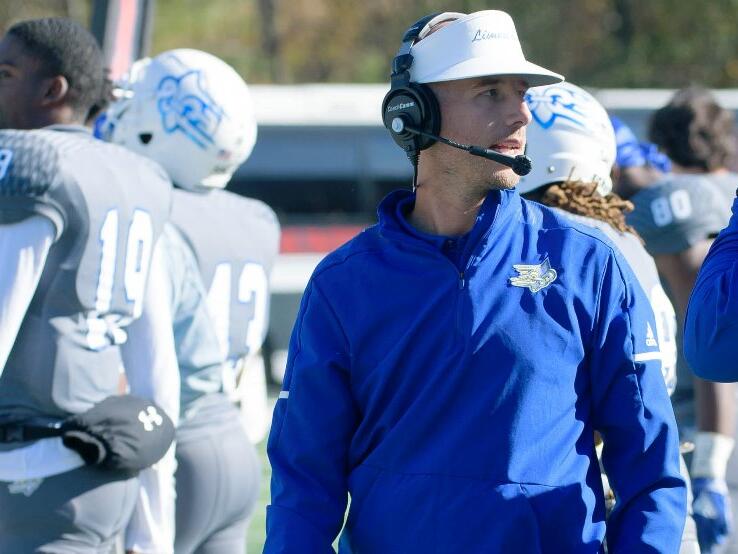 After the traditional fall season was postponed due to the COVID-19 pandemic, Limestone University has unveiled a reduced spring football schedule featuring six games, including four South Atlantic Conference contests, that will be played during a seven-week stretch in March and April of 2021.

The SAC announced at the end of September that five traditional fall sports – field hockey, football, women’s volleyball, and men’s and women’s soccer – will play a reduced spring schedule in 2021. With the league broken up into two divisions based on geography, football will compete in a four-game conference schedule and will have an opportunity to play for a SAC Championship on Saturday, April 17.

The Saints will be a part of the Mountain Division this spring along with Carson-Newman, Mars Hill, Tusculum, and the University of Virginia-Wise. The Piedmont Division will consist of Catawba, Lenoir-Rhyne, Newberry, and Wingate while scheduling partner Barton rounds out the division. Barton is not eligible for the title game.

Limestone starts the year on Saturday, March 6, when it travels to Rome, Ga. to take on Shorter University. It will be the first meeting between the two programs, and the Blue and Gold’s fifth game all-time against a Gulf South Conference opponent.

The Saints will then have a bye week before welcoming UVA-Wise to The Reservation at Gaffney High School on Saturday, March 20. Last season, Limestone knocked off the Cavaliers on the road, 27-6, with a solid defensive showing, limiting the Cavs to just 199 total yards and a late touchdown in the fourth.

Following its first of its two home games, Limestone makes back-to-back trips to Tennessee as it plays at Carson-Newman on March 27 and at Tusculum on April 3. The Eagles slipped by the Saints in the final seconds last season, while the Pioneers pulled out to a commanding 35-0 halftime lead a year ago.

Closing out the conference slate, Mars Hill makes the trek to Gaffney on Saturday, April 10.

The following week, the top team from each division will then meet in the SAC Championship Game on Saturday, April 17. Full details of the title game have yet to be determined, but the league is currently developing a plan.

If Limestone does not qualify for the SAC Championship, it will instead close the abbreviated spring schedule with a road contest at Erskine College on April 17. The Flying Fleet are in their first season of competition since resurrecting the football program following a 69-year hiatus – they last competed in football in 1951.

The NCAA recently made the determination that game results and stats accumulated during the spring 2021 season will count toward team and individual career statistics and records. The SAC will recognize players of the week in the spring and will put together pre-season and post-season all-conference teams.