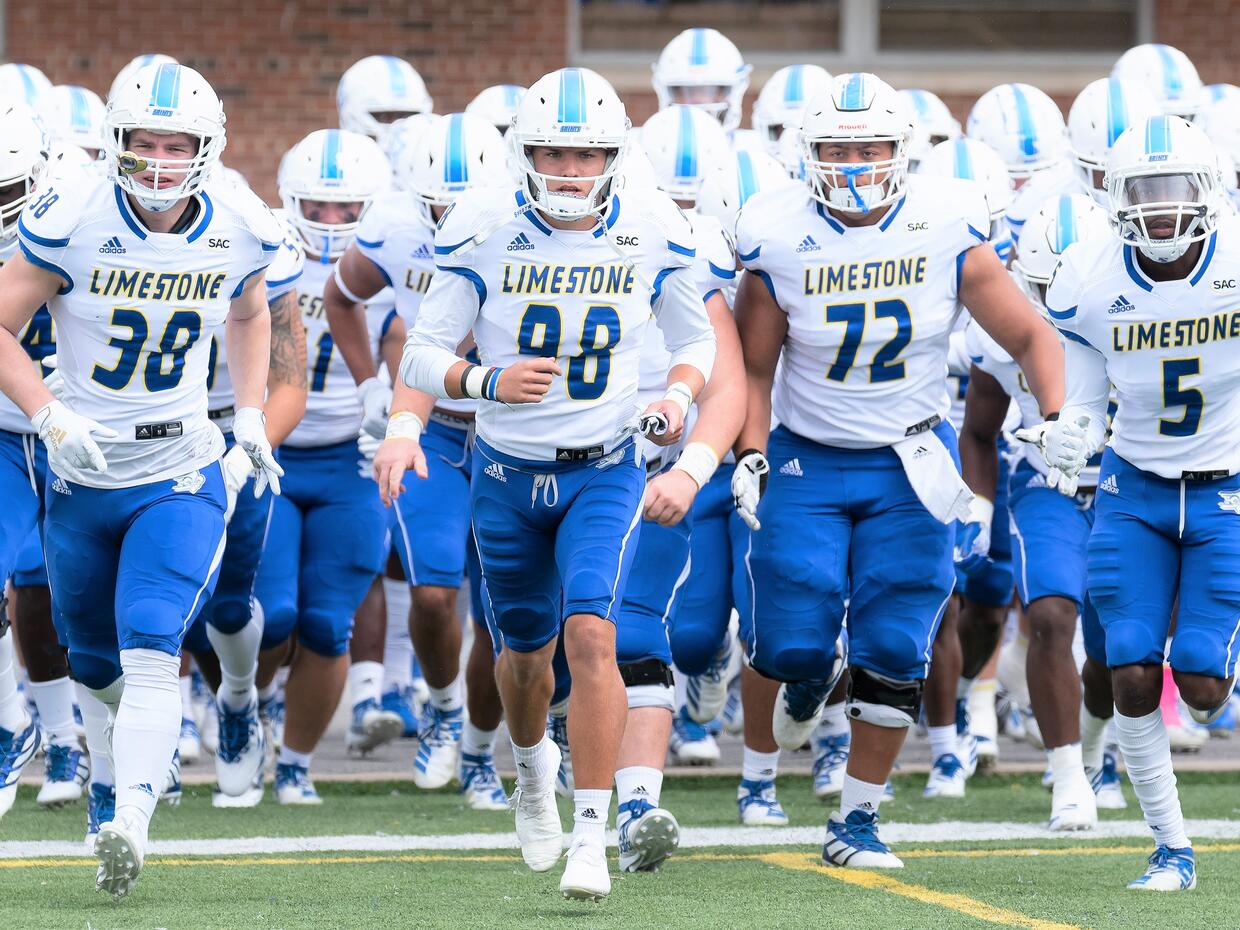 With its traditional season postponed until the spring of 2021, the Limestone University football team will hold a Blue & White Game on Saturday, Nov. 7, at Gaffney High School’s Reservation stadium.

The fall scrimmage is scheduled to kickoff at 12 p.m.

The primary reason Limestone officials selected November 7 for the “Blue & White Game” this fall was to have the opportunity at the scrimmage to celebrate the institution’s 175th anniversary.

Originally named the Limestone Springs Female High School, the new institution attracted the daughters of some of the most influential families of South Carolina, who sought the finest liberal arts education available. On Thursday, Nov. 6, 1845, a total of 67 young women began their classes at Limestone. Just five days before, on Nov. 1, 1845, a local bank signed over the deed of the Limestone Springs property to Dr. Thomas Curtis, a scholar born in England who emigrated to the United States in 1833.

Curtis was able to fulfill his dream of establishing an institution of higher learning for young women by purchasing a building at Limestone Springs that had been constructed in the 1830s as a resort hotel. In 1881, the school became known as the Cooper-Limestone Institute, and in 1898, it became Limestone College. The institution changed its name to Limestone University on July 1 of this year.

“The ‘Blue & White Game’ gives us the opportunity to celebrate our student-athletes returning to the field, and it also enables us to come together as a campus and a community to commemorate Limestone’s 175th anniversary,” said President Dr. Darrell Parker. “The game will serve as a birthday party of sorts for Limestone, where we have so much to be proud of and even more to build upon. We’re looking forward to cheering on our Saints on the same weekend that, 175 years before, Limestone students started their educational journeys for the very first time.”

The fall game will be limited to roughly 2,500 spectators at The Reservation due to COVID-19 guidelines and policies set forth by the CDC, DHEC, the Cherokee County School District, Limestone University, the South Atlantic Conference, the NCAA, and the State of South Carolina. Admission to the game will be free, but fans will need to reserve their tickets online by visiting www.golimestonesaints.com.

Tickets will be distributed on a first-come, first-serve basis with a percentage of the 2,500 tickets allotted to students, families, faculty and staff, Saints Club members, and recruits and their families. All fans will sit on the home side and may sit in pods of two or four (no more than four people to a pod) and must be six feet from the next closest pod. The visiting side will be reserved for the band and the dance and cheer teams. No fans will be allowed on the field before or after the game. Social distancing protocols will be followed at all times.

Parents and donors will be allowed to pick up their tickets at the stadium on November 7 at the press box will call window starting at 10 a.m. A photo ID will be required for pick-up. The black and gold labeled parking lots will open two hours before game time, but no tailgating or congregating in parking areas will be permitted.

The Saints will play a six-game reduced spring schedule in 2021 with two home games currently on the docket against UVA Wise (March 20) and Mars Hill (April. 10). Limestone will start the spring season with a road trip to Georgia to face Shorter University on Saturday, March 6.