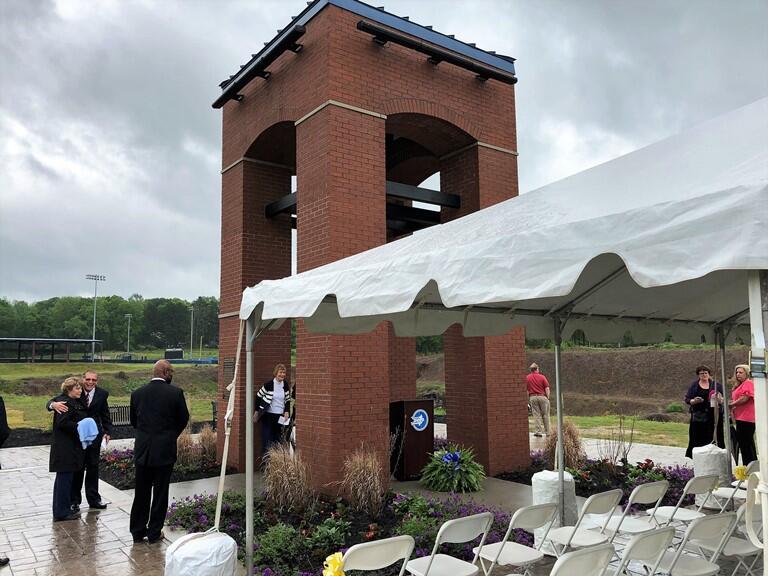 Moments after the conclusion of the dedication ceremony for the Cunning Victory Bell Tower at Limestone College on Sunday afternoon, the threatening dark clouds overhead finally let loose with a heavy downpour of rain.

But that did not remotely dampen the spirts of the large crowd that was on hand to celebrate the conclusion of a construction project that had been years in the making.

Named in memory of the late Barbara Cunning by her husband Dr. Charles Cunning, the Victory Bell Tower now overlooks the Limestone Quarry and is situated between the College's athletic and academic facilities.

Because of the threat of rain and storms in the area, a large white tent was brought in to cover those in attendance. Although there were bursts of heavy downpours throughout the morning, not a drop of rain fell during the ceremony itself that got underway at 12 noon. For the 45 minutes that it took to make the speeches and take the commemorative photos, not a single raindrop fell.

“It was divine intervention,” said Cunning, who traveled to Colorado to attend the event. “The good Lord gave us the window we needed to hold the ceremony. I could not be more proud to have this tower on Limestone’s campus.”

The Bell Tower announces to the campus community each time a Saints athletic team posts a victory at home or away by playing the “Blue and Gold” fight song.

The now ornamental bell inside the tower hung from the top of the Curtis Administration Building for several decades until it was removed in 1998. It was acquired in the late 1800s when the College in Gaffney was known as the Cooper-Limestone Institute for Young Ladies. Weighing 250 pounds with its mounting, and measuring 24 inches in width at its lower edge, the bell for many years summoned Limestone’s students to their classes and meals.

Once the bell was replaced by an electronic system in the campus buildings, Cunning led the effort to remove the bell from the attic of the Curtis Administration Building in 1998 and place it into storage until it could be refurbished last year while the tower itself was being constructed.

“Thanks to the generosity of our friend, our Vice President Emeritus, and our loyal donor Dr. Chuck Cunning, we are gathered here today to dedicate Limestone College’s new Victory Bell Tower,” said Limestone President Dr. Darrell Parker. “Dr. Cunning, we thank you for this amazing gift that you and your family made in the memory of your lovely late wife, Barbara. The Bell Tower he has made possible announces our many victories in athletics and it adds to the beauty of our historic campus. It will – no doubt – soon be a popular meeting place and destination for students, faculty, alumni, and members of this community.

“Each and every time we hear our fight song from this tower, we will celebrate a Limestone victory and also remember Barbara and what she meant to so many,” he added.

During his formal comments at the dedication, Cunning gave heartfelt thanks to so many who played instrumental roles in saving the historic bell and developing the plan to build the bell tower.

Because Cunning is an avid supporter of Limestone men’s lacrosse, the entire Saints team and coaching staff attended the event that was held a short time before their afternoon home game against Barton College.

At the conclusion of the ceremony, Limestone Vice President for Intercollegiate Athletics Mike Cerino introduced the “Blue & Gold” fight song that was then played through the tower’s sophisticated audio system.

Cunning, family members, and friends in attendance took turns after the ceremony pulling a bright yellow rope to sound the actual antique bell.

At the conclusion of Sunday’s dedication, Cunning and his invited guests were treated to a catered luncheon inside the nearby Bob Campbell Field House.