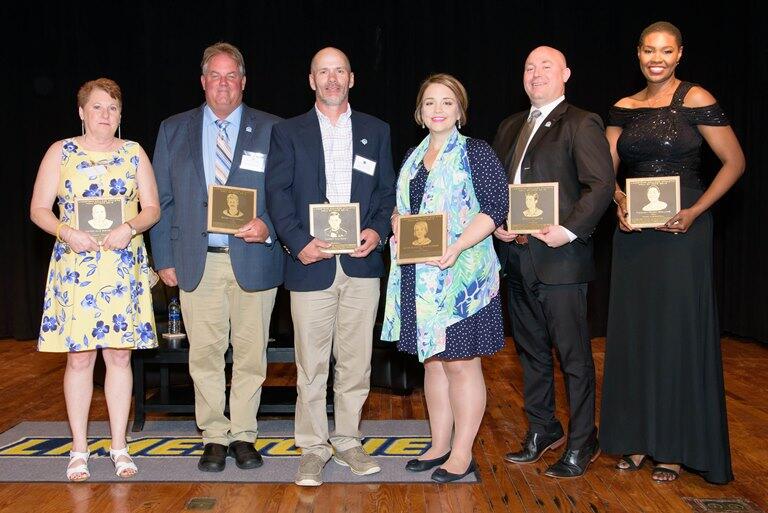 The Limestone College Athletics Department inducted its 2019 Hall of Fame Class -- a group of six individuals who left their mark on their respective programs during a span of four decades -- on Saturday, April 6.

Robb Thompson
A four-year standout player and a two-year player/coach with the Saints, Robb Thompson was the first and only top-ranked junior player in South Carolina to compete at Limestone. He played No. 1 singles in three of his four years with the Blue and Gold, anchoring two nationally ranked teams during his tenure.

Thompson won two tournaments while at Limestone, taking top honors at the Asheville Intercollegiate Indoors and a tournament win at Concordia College (N.Y.). He was ranked 17th nationally as an individual during his sophomore campaign while leading the Saints to a No. 4 NAIA national ranking.

He combined to win over 20 singles matches in a two-year stretch and earned the NAIA District Six Sportsmanship Award as a junior. Thompson would also serve as the team's head coach for two seasons, taking over the reins of the program during his junior and senior years.

Gavin Higgins
An Honorable Mention All-American in 1998, Gavin Higgins led the men's lacrosse team in assists for three straight years and still ranks second all-time in program history with 132 career assists. In four seasons with the Saints, he graduated with 198 career points – a mark that ranks ninth all-time.

A three-time All-Deep South Conference selection, Higgins holds three of the top-10 spots in the program's single season record book for assists. He tallied 43 assists in 1997, which ranks third all-time in team history at the time of induction, before posting 36 assists during his junior and senior campaigns.

In his final season with the Blue and Gold, Higgins was named the 1999 Deep South Player of the Year after helping to lead Limestone to its first 10-win season in program history. He led the Saints with 65 points as a sophomore, and then followed up with a team-leading 51 points during his junior year.

Harry Hutson
One of the best players to ever put on a Limestone baseball uniform, the legacy that Harry Hutson left on the program is still very visible to this day. Named a NAIA All-Region selection as a sophomore, he posted a .394 batting average to go with 13 homeruns, 18 doubles and 61 RBIs during the 1997 season.

Hutson's 38 career homeruns stood as the benchmark for 19 seasons until it was broken by Chase Allen during the 2018 campaign. As a pitcher, he also ranks 10th in team history with 12 career wins and ninth with 153 career strikeouts. After four years with the Saints, Hutson moved on to play professionally.

Tierney Pugh Rollins
One of 14 players in program history to recorded over 1,000 career points and one of six players with over 700 career rebounds, Tierney Pugh Rollins played three seasons with the Saints and was a two-time All-CVAC award winner, including second-team honors as a junior, and CVAC All-Tournament selection.

Rollins remains a fixture in Limestone's career record book as she ranks 11th in points (1,136), fifth in rebounds (742), third in blocks (97), and ninth in shooting percentage (.503). She pulled down 269 rebounds her first year and then grabbed 274 boards as a junior – both are single-season top-10 marks.

Rollins guided the Saints to a pair of winning seasons and the program's first conference championship game appearance in 2001. She posted 50 blocked shots that year, one of just three players in program history to accomplish that feat, and then served as an assistant coach for one season after graduation.

Van Antwerp medaled in six different events during her tenure with the Saints and was named the team's MVP three straight years. She placed first on the individual leaderboard at the Upstate Classic as a freshman and was later named a second-team All-CVAC award winner during her rookie year.

Following a 3rd place finish at the 2006 CVAC Championships, Van Antwerp medaled at five events during her junior and senior seasons while earning first-team All-CVAC/Conference Carolinas honors both seasons. She fired identical scores of 231 (+18) at the conference championships in that same span.

Officer Dave Richardson
George David Richardson, affectionately known as Officer Dave, not only left a lasting legacy at Limestone College and with the Athletics Department, but the love that he shared with each and every student-athlete, coach, and staff member will be forever remembered by those that knew him.

A Vietnam veteran, Officer Dave was very proud of his time serving our nation in the United States Army, but his greatest passions in life was his family and Limestone Athletics. He could always be found at Limestone athletic events, either in his personalized golf cart or at his favorite seat in the Timken Center, handing out lollipops from his custom made ammo can and offering smiles to anyone who wanted to talk.

Officer Dave often enjoyed traveling with Limestone teams, including many different NCAA Regional and NCAA Championship events. Even when battling his illness, he and his wife, Kathy, were often seen at Limestone events cheering on the folks that he loved – Officer Dave passed away on August 16, 2017.