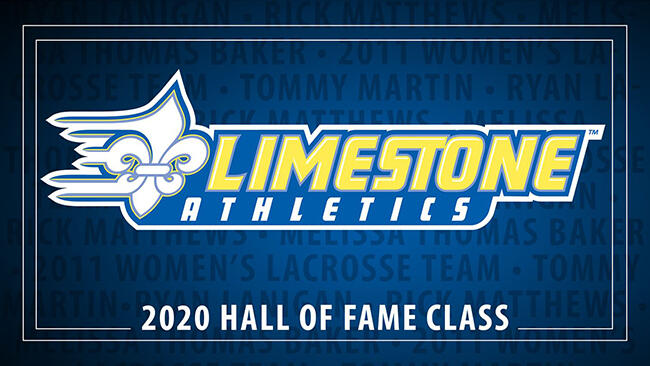 The Limestone College Athletics Department is proud to announce the 2020 Hall of Fame Class, a group of three individuals, one team, and a special inductee who have all left their mark on their respective programs while setting the standard of success the department has recently enjoyed.

The Limestone College Hall of Fame Induction Ceremony will take place on Saturday, March 21, at 7 p.m., at 1800 Drayton Catering and Events in Spartanburg.

RYAN LANIGAN '00
A four-year defenseman with the Saints, Ryan Lanigan helped transform the Limestone men's lacrosse team into a regional and national power during his time in the Blue and Gold. He was a two-time All-American, earning a second-team selection as a junior and honorable mention during his senior year.

Lanigan anchored a Limestone defense that allowed just 6.92 goals per game in 1999 - a mark that still ranks sixth overall in program history at the time of induction - and helped the Saints sweep the Deep South Conference Regular Season and Tournament Championships for the first time that same season.

In his final two years at Limestone, the team combined for an 11-0 mark in league play before winning a conference tournament title for the first time in school history with a 16-7 decision over Wingate in 1999. Lanigan was then a student assistant on the 2000 NCAA Division II National Championship Team.

RICK MATTHEWS '00
Named an All-American in each of his two seasons at The Rock, Rick Matthews was the team captain of Limestone's NCAA Division II Men's Lacrosse National Championship Team in 2000 - a breakthrough that catapulted the Saints into a national power that has been sustained over the past 20 years.

In his first year with the Blue and Gold, Matthews helped lead Limestone to the program's first Deep South Conference Regular Season and Tournament Championship sweep in 1999. He was named Honorable Mention All-America during his junior campaign as the Saints posted their first 10-win season.

Matthews was selected to serve as the team captain the following year, helping to lead Limestone to a 14-2 overall record and a 6-0 mark in league play. He earned First-Team All-American honors that season as the Saints shocked the lacrosse world with 10-9 win over C.W. Post in the national title game.

MELISSA THOMAS BAKER '10
Arguably one of the most dominant players to ever to come through the Limestone women's volleyball program, Melissa Thomas Baker was a four-time All-Conference Carolinas selection and the 2008 Conference Carolinas Player of the Year. She is the only player in team history to earn that distinction.

Baker led the Saints to three 20-win seasons and four top-3 finishes in the conference standings during her four-year tenure in the Blue and Gold, including the program's only Conference Carolinas Regular Season Championship in 2006. Limestone combined for a 62-16 record in league play during that span.

She finished with 1,924 career kills and posted a .327 career attack percentage, and tallied a program-record 539 kills and 4.42 kills per set as a sophomore. Baker was twice named to the Conference Carolinas All-Tournament Team and was a two-time Academic All-Conference Carolinas selection.

2011 WOMEN'S LACROSS TEAM
One of the best women's lacrosse teams to come through a storied Limestone program, the 2011 squad posted an 18-2 record and reached the NCAA Division II National Championship Game for the first time in team history. The 2011 Saints are tied for second all-time in program history for most wins in a season.

Limestone climbed to No. 3 in the national rankings in 2011 and won six games decided by two goals or less. The Saints swept the Conference Carolinas Regular Season and Tournament titles that season while Chelsea Treat was named Conference Player of the Year and Scott Tucker was Coach of the Year.

TOMMY MARTIN
A former member of the Limestone Board of Trustees, Tommy Martin has been a journalist for 54 years, spending much of that time serving the Gaffney and Cherokee County communities. He founded The Cherokee Chronicle in 1991 and has served as the paper's publisher/editor for the past 28 years.

During his time as both a journalist and a trustee, he has continuously shined a positive light on Limestone College and Saints Athletics. He has helped bring awareness to Limestone Athletics in his various roles, including reporter, sportswriter, photographer, sports editor, editor, and publisher.

Martin has won numerous local, state, and national awards over five decades and has been recognized by the South Carolina Press Association, the Associated Press, and many other organizations. Through his dedication, he has utilized his talents, expertise, and platforms to give voice to Limestone Athletics.