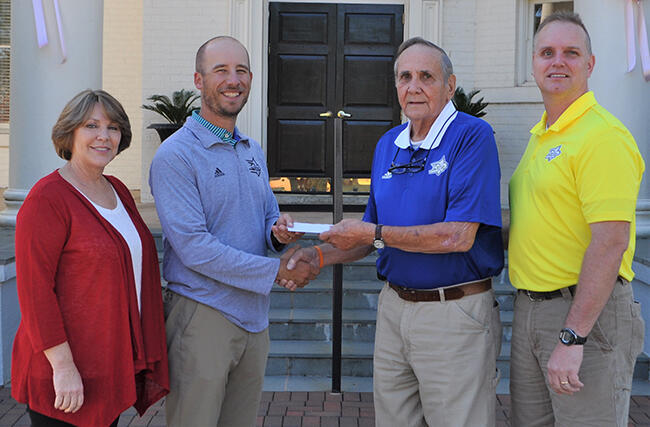 The Clary family, with a well-known rich tradition of pigskin prowess in Cherokee County and across the state, recently made a generous donation to Limestone College as part of its efforts to acquire the naming rights to the institution’s football practice field.

The $100,000 fund-raising effort has been underway for five years, and the latest contribution got the project very close to the finish line. The check was recently presented to Limestone by Broughton Clary, who was accompanied by his son, Chip.

The Saints’ football practice field is located off Leadmine Street, near the Bob Campbell Field House inside the Bob Prevatte Athletic Complex.

“Everyone in Gaffney and Cherokee County knows about the rich football history of the Clary family,’ said Kelly Curtis, the College’s Vice President for Institutional Advancement. “The family now wants to invest in the football program at Limestone. We appreciate this latest donation and we know it’s just a matter of time before the naming rights goal is met.”

The project officially kicked off in March of 2014, when Jim and Margaret Clary hosted a reception at Limestone’s Stephenson Dining Hall to provide family members with the project details.

Once the fundraising goal is met, new signage will be erected at the football practice field.

The Clary family has produced several well-known football players at Gaffney High, and many went on to enjoy success on the collegiate level, including some who played at the University of South Carolina and at Furman University. Earl Clary, “The Gaffney Ghost” was a legend at Gaffney High and USC.

Clary played for the Gamecocks from 1931-1933. He was given his nickname by USC head coach Billy Laval. “He was a football ghost from Gaffney and the greatest back I’ve ever seen,” Laval said of the shifty runner. After his senior year, Clary was named to the All Southern team, and he was inducted into the University of South Carolina Athletics Hall of Fame in 1967.

At Gaffney High, Clary scored 24 touchdowns in seven games in 1929. Although detailed statistics were not kept during Clary’s playing days at GHS, newspaper clippings from that era indicate that he totaled over 2,000 yards on just his touchdown runs while playing for the Indians.

Those interested in making donations to the “Clary Family Football Practice Field” can do so by visiting www.limestone.edu/giving, or by calling (864) 488-4602.