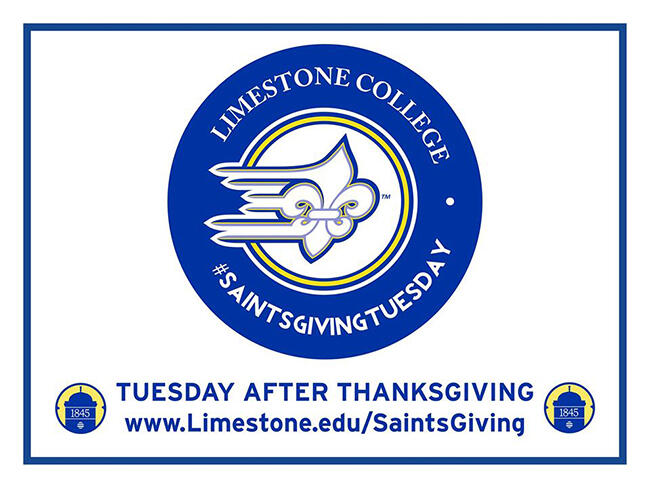 Limestone College’s sixth annual “SaintsGiving” event was deemed a tremendous success as over $100,000 was raised recently to support numerous areas of the institution.

A total of $100,852, including gifts and pledges, was raised during the event that concluded at midnight on Tuesday, Dec. 3, according to Kelly Curtis, Limestone’s Vice President for Institutional Advancement.

In all, 126 donors contributed to 34 different funds, with much of the support assisting Limestone’s many scholarship programs.

“We appreciate everyone who made an investment in the College and our students,” Curtis said. “The focus of this year’s ‘SaintsGiving’ was on donor participation, and we were thrilled to have so many friends and alumni of Limestone making donations online and by visiting our offices. No matter the size, every gift truly makes a difference and counts as a positive vote for the future of Limestone and its students. We were just blown away by the number of donors, the amount raised, and the generosity of our students, staff, alumni, and friends of the campus.”

Founded in 2014, “SaintsGiving” is held at Limestone each year in conjunction with the global “Giving Tuesday” movement that takes place the Tuesday after Thanksgiving. “Giving Tuesday” has created a national day of giving to kick-off the holiday season.

“Throughout the day, we heard time and time again from individuals who said they were making contributions because they appreciated the impact higher education had on their lives,” Curtis noted. “We have so many wonderful student scholarship programs and academic endeavors to support at Limestone. ‘SaintsGiving’ powerfully showed once again the pride and the commitment Limestone enjoys among those connected to the College. We sincerely thank all those who participated in a special day of giving. The event was an inspiring reflection of the partnerships Limestone works so hard to nurture.”

For those who did not get a chance to take part in “SaintsGiving” earlier this month, tax-deductible gifts can be made year-round to the College by visiting www.limestone.edu/giving.