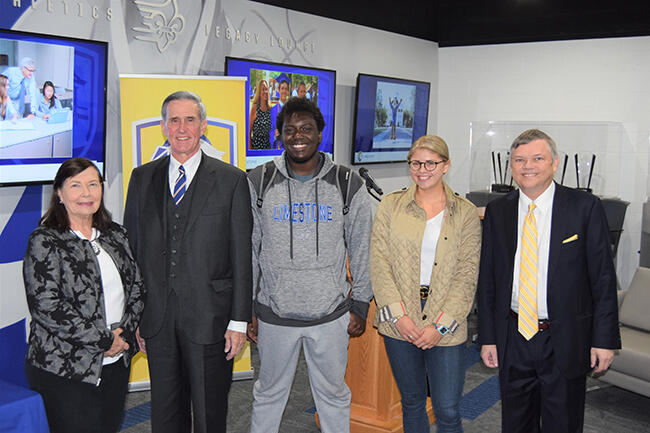 The path to medical school just got easier for qualified students who successfully follow a distinct academic protocol during their time at Limestone College.

Limestone College held a historic press conference on campus on Tuesday, Dec. 3, at its Timken Center Legacy Lounge to announce an articulation agreement with the Edward Via College of Osteopathic Medicine (VCOM), which is a doctoral-level osteopathic medical college with a nearby campus in Spartanburg.

Limestone’s new partnership with VCOM will provide its pre-medical students an opportunity to receive a Guaranteed Admissions Interview, as well as take part in an Early Admission Program. VCOM typically receives 11,000 applications for about 500 spots in its program.

VCOM requires four years of education, including biomedical and clinical courses. Completion of these requirements is required to award the Doctor of Osteopathic Medicine degree.

The mission of VCOM is to prepare globally-minded, community-focused physicians to meet the needs of rural and medically underserved populations and to promote research to improve human health.

“My wife and I were motivated to start a medical college for what was underserved areas of Virginia,” said John Rocovich, who founded VCOM and currently serves as its Chairman of the Board. “It the time we started, they were projecting a shortage in 2010 of 50,000 physicians nationally, and that number turned out to be 68,000. By 2020, they were looking at a shortage of about 200,000. Because of schools like VCOM that have opened, the shortage number is down to about 100,000 for 2020.

“Our goal in life is simple, as I tell the students on the first day: ‘We’re here to save the world,’” he continued. “‘That’s our mission. And if that’s not your mission, then you came to the wrong school.’ We want to churn out what we feel is the biggest need, and that’s primary care physicians who will stay in the Appalachian and Southeastern part of the United States and practice medicine for the rest of their lives. We view Limestone as the type of place which has provided us with outstanding students and can provide us with a lot more. We essentially want to be is Limestone’s College of Medicine.”

“What we want to offer Limestone, as an inducement and to continue to build our relationship, is an articulation agreement which essentially says to Limestone that we will give you ‘most favored nation status.’ We will accept all of your students who have the capacity to get through medical school,” Rocovich noted. “Another thing we have is a special program called the Rocovich Scholars Program which provides students, if they are really outstanding after the first two years and take the necessary courses, into medical school after those first two years. We can wave the MCAT (Medical College Admission Test), which eliminates a lot of expense and stress. So, our goal is developing a long-term relationship with Limestone on the belief and the conviction that they will provide us with the type of students we need to be successful and to settle into this area.”

Limestone College President Dr. Darrell Parker said the agreement with VCOM was a major accomplishment for Limestone and its students, especially as his institution makes a move to university status in time for the Fall 2020 semester.

“I had a conversation very recently where it was explained to me that there was a student who had great grades through high school and she wanted to be a physician,” Parker commented. “She had chosen to go to a large state university in the Carolinas. After the first year with the intro classes with hundreds of other students in the lecture halls with the graduate assistants teaching, she wasn’t sure what to do because her grades were not where she had hoped they would be. Her support wasn’t there.

“The person telling me that story then asked me, “So, what’s going on at Limestone?’ And I said, ‘Well after Tuesday, there’s going to be a better path for students like that,” he added. “Because at Limestone, they will take those courses from dedicated faculty. And if they have a question, I know our faculty will wear them out with answers when they come by the office. We have some of our pre-med students here today who can reinforce that understanding and belief. If they take the right courses – and our faculty will make sure they do – and make the right grades, students will know they are on the path to medical school because of the great opportunities with VCOM.”

Parker also noted that former Limestone students have already been a part of medical school at VCOM and are now practicing physicians. He expects those numbers to increase drastically in the coming years.

“This partnership works not because VCOM is willing to be our medical school, but because we share a vision,” Parker said. “We share a vision of helping the Carolinas, and especially the rural Southeast, and making sure that our students are able to have the careers and service opportunities that they desire. This path to become a physician compliments well our Nursing program and Behavioral Health program, and the other areas that we are expanding at Limestone.”

For more information about how to enroll at Limestone College, visit www.limestone.edu.

VCOM is a non-profit, private organization initially funded by several foundations that were established by the late Marion Bradley Via to benefit Virginia Tech and Southwest Virginia. Marion Bradley's son, Edward Via, was the person instrumental in approving the dedication of funds to this initiative. John and Sue Ellen Rocovich were the individuals instrumental in founding the Edward Via College of Osteopathic Medicine, laying all the groundwork to establish the College. At the time of initial development, VCOM’s vision was to provide healthcare for Southwest Virginia, Western North Carolina, and the Appalachian Region, and to promote biomedical research with Virginia Tech.

In 2010, in response to the enrollment of a significant number of students from western North Carolina and South Carolina, VCOM founded the Carolinas Campus of the Edward Via College of Osteopathic Medicine in Spartanburg. VCOM’s Auburn campus then opened as a fully-accredited branch in 2015.