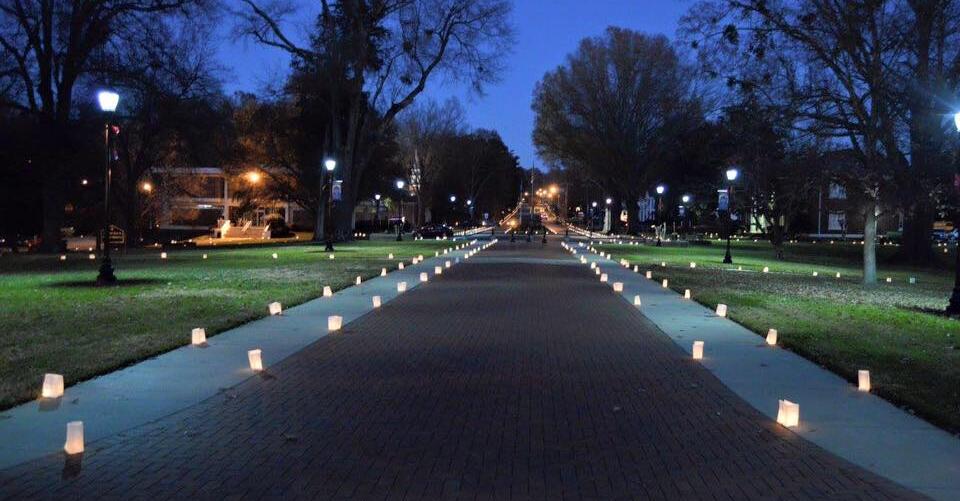 A holiday tradition that goes back over three decades at Limestone University will not take place this Christmas season due to the COVID-19 pandemic.

The 36th annual Limestone Luminaries would have taken place on Saturday, Dec. 5, along with a performance by the Limestone University & Community Chorus. However, because of changes to the fall semester academic calendar, students will not be on campus to make those events possible. Instead of ending the semester as usual in December, Limestone students will return home during the Thanksgiving break and then complete their final exams online. University officials made the decision to minimize exposure and the probability of infection spread on campus and in the community.

Typically, hundreds of Limestone’s student-athletes volunteer to fill, place, and light approximately 10,000 white bags containing sand and candles to illuminate the campus and surrounding area as a Christmas celebration.

“We are certainly saddened that the luminaries and concert will not take place this year, but without our wonderful students here to make that magic happen, we felt it was appropriate to pause the event this holiday season,” said Limestone President Dr. Darrell Parker. “Our main concern remains keeping our campus and local communities as safe as possible, and one way we are doing that is allowing our students to return home for Thanksgiving and remain there until the spring semester begins in January. We appreciate so much our local residents who come out year after year to enjoy the luminaries and hear our amazingly talented chorus. We have no doubt that the luminaries and the concert will return even bigger and better next year.”

The luminaries are customarily placed on the front campus and portions of College Drive and other areas near the University.

The tradition dates back to 1984 when the late Les Gregory, a former staff member and graduate of Limestone, arranged for 200 luminaries to be lit in honor of retired professor Lucy G. Wheeler. Since Gregory's inception, the luminaries have grown to around 10,000 candles and the event has flourished into one of the most anticipated nights of the year at the University.

The luminary event is now organized each year by Limestone’s Athletics Department.

The chorus – conducted by Dr. Gena Poovey, Professor of Choral/Vocal Music Education and Director of Choral Activities at Limestone – is made up of students from the University and members of the local community. It typically performs the free concert open to the public inside Fullerton Auditorium on the same night as the luminaries. The accompanist is Limestone Professor of Music Dr. David Thompson.

Limestone will soon release a “2020 Choral Christmas Project” that will be a video production that will be featured on the Department of Music’s Facebook page and additional social media channels of the University.

“Because we will be unable to perform live for the public this holiday season, we have been working diligently to develop this video project,” Poovey explained. “We are looking at this project as our holiday gift to the community. And we look forward to being back in front of a live audience as soon as it’s possible.”

The tradition of Christmas luminaries dates back at least to early 17th-century Spain. In one version of how it started, people burned cedar boughs along town paths, symbolically lighting the way to Bethlehem for Mary and Joseph. A slightly different version suggests that luminaries were intended to brighten the way for the Magi. The tradition is a feature of numerous Christmas festivals in the American Southwest.