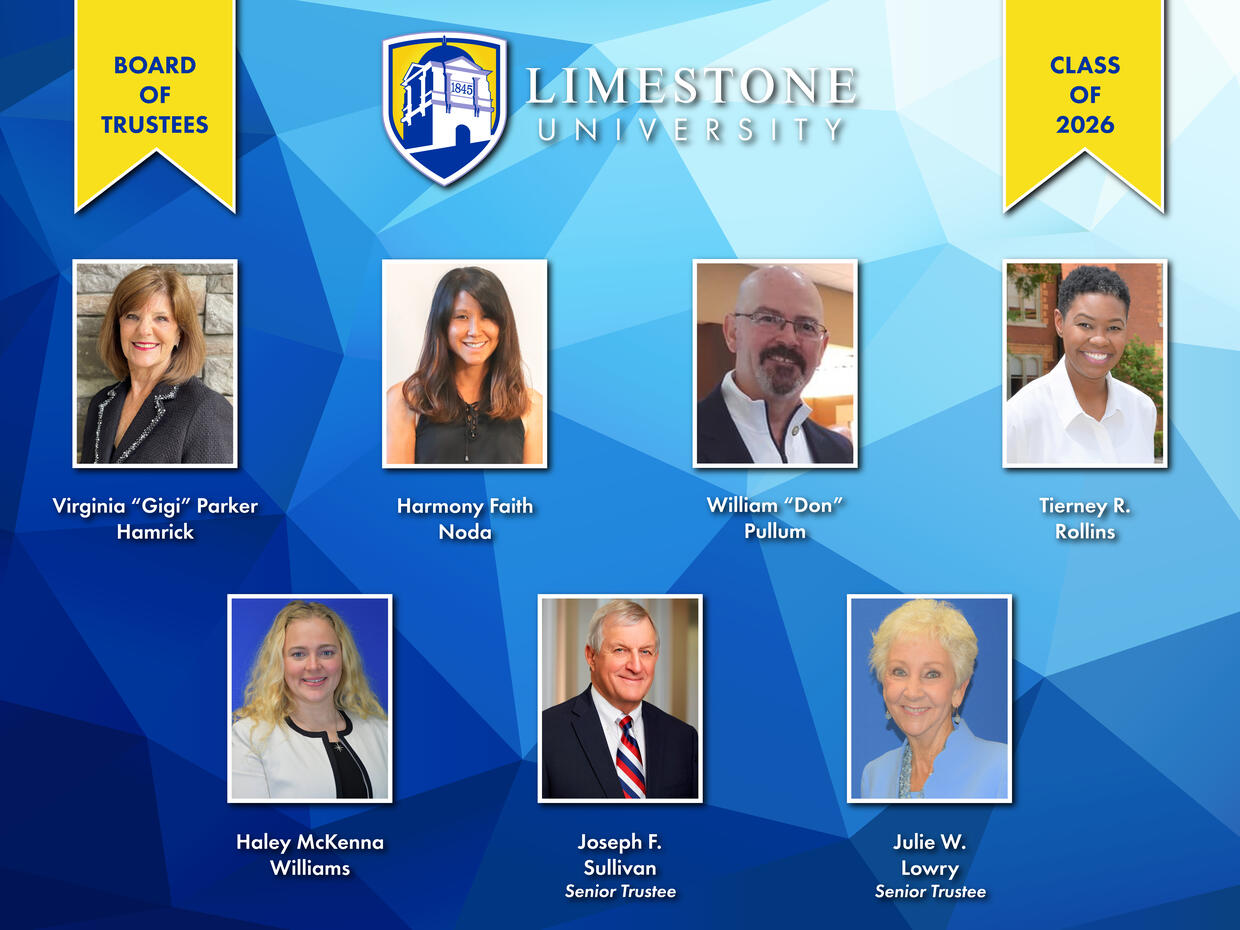 Five new members were recently elected to the Limestone University Board of Trustees and will serve five-year terms that officially started on July 1.

The Limestone University Board of Trustees Class of 2026 includes Virginia “Gigi” Parker Hamrick, Harmony Faith Noda, William “Don” Pullum, Tierney R. Rollins, and Haley McKenna Williams. All five are serving their inaugural terms on the Board.

In addition, former Board of Trustees members Julie W. Lowry and Joseph F. Sullivan are returning as Senior members of the Board and will also serve five-year terms.

“We are excited to welcome these exceptional individuals to our Board of Trustees,” said Limestone President Dr. Darrell Parker. “They bring a wealth of knowledge and passion to our Board and I look forward to working with them in the coming years as we fulfill our mission of being one of the finest comprehensive universities in the region and the nation.”

The members of the Board of Trustees are responsible for assisting in legal and fiduciary decisions; approving the mission, strategic goals, and objectives of the organization; establishing policies; and advising those responsible for the management of the institution. Each member also provides the Board of Trustees with guidance on issues and activities related to their areas of professional interest, and elects members to ensure a balance of regional and professional perspectives.

“This is an outstanding group of new members of the Board of Trustees,” noted Board Chairman David Riggins. “They will each bring with them different perspectives and diversified backgrounds. We appreciate them giving their time and lending their talents to further strengthen Limestone University.”

Below is information on the newly elected members of the Limestone University Board of Trustees.

Virginia “Gigi” Parker Hamrick, residing in Gaffney, graduated from Limestone in 1975. Now retired, she previously served as a full-time elementary education teacher Gaffney; Marion, NC; and Princeton Junction, NJ. She also served as a substitute teacher in Cherokee County and the West Windsor-Plainsboro Regional School District in New Jersey. Hamrick currently serves as a member of the Board of Trustees for Buford Street United Methodist Church and is a member of the Cherokee County Citizens Planning Commission. Her family also plays host to Limestone University students who are members of the Fellowship of Christian Athletes. She is a former board member for the Cherokee Children’s Home. Hamrick and her husband, Carlisle, have three children.

William “Don” Pullum, residing in Augusta, GA, is an alumnus of Limestone College and the University of South Carolina. He is the Watch Division Manager for Windsor Fine Jewelers Group in Augusta, which is the largest independent jeweler in the Southeastern United States, and the eighth-largest in the nation. Pullum oversees buying, marketing strategy, staff training, and overall sales of numerous Swiss watch brands. He has also served as a credit analyst for First Union Bank and a store manager for Friedman’s Jewelers. Pullum was presented with Limestone's Service to College Award in 2012. He has provided numerous gifts and services to charities in the Augusta area.

Tierney R. Rollins, who resides in Gaffney with her husband, John, graduated from Limestone in 2002. She is also a graduate of Murray State University. Rollins is a prevention specialist/community facilitator with the Cherokee County Commission on Alcohol and Drug Abuse. A certified prevention specialist, she is dedicated to educating the community about the risk and protective factors of alcohol, drugs, and tobacco. She facilitates small and large groups building community partnerships, leads groups teaching evidence-based curriculum for skill-building, decision making, and resilience, and organizes community events. Rollins has also served as a graduation coach at Crest High School, and as girls basketball varsity assistant coach and junior varsity head coach at Gaffney High School. Her community involvement has included being a children’s ministry leader at Buffalo Baptist Church, a member of the YMBA Board of Directors, a member of Crime Stoppers, and a board member for the Cherokee Pregnancy Center. A former member of the Limestone women’s basketball team, she was inducted in the Saints Athletics Hall of Fame in 2019.

Haley McKenna Williams, a native of New York now residing in Gaffney, is a 2013 graduate of Limestone and was a member of the field hockey and tennis teams. Williams received her Juris Doctor degree in 2016 from Charlotte School of Law. She is sole proprietor and an attorney for Williams Law, LLC in Gaffney. She previously served as an associate attorney for Brown Law, LLC; and was a legal intern for the 7th Circuit Public Defender’s Office and Winter & Rhoden, LLC, in Gaffney. In addition, she was a Deferred Action for Childhood Arrivals clinic volunteer for the Latin American Coalition in Charlotte. Williams is a member of the Cherokee County Bar Association, Rotary Club of Gaffney, Main Street Project Committee, and Cherokee County Economic Reconstruction Committee. She and her husband, Darin, are expecting their first child later this year.

Julie W. Lowry, a newly elected Senior Trustee who lives in Spartanburg, has previously served four terms on the Board of Trustees. She is a Limestone College graduate. Now retired, Lowry’s career included being a high school teacher and a college professor. She and her husband, William, have two children. Lowry received the Service to Community Award from the Limestone Alumni Association in 2002.

Joseph F. Sullivan, a newly elected Senior Trustee who resides in Greenville, grew up in Gaffney and is a 1967 graduate of The Citadel. A former U.S. Army Lieutenant, Sullivan has served on numerous boards including the Greenville County Schools, Greenville County Foundation, United Way of Greenville, St. Francis Hospital Foundation and Board of Directors, Legacy Charter School Board, and Episcopal Church Vestry. He had previously served one term on the Limestone Board of Trustees. Sullivan and his wife, Donna, have two children.