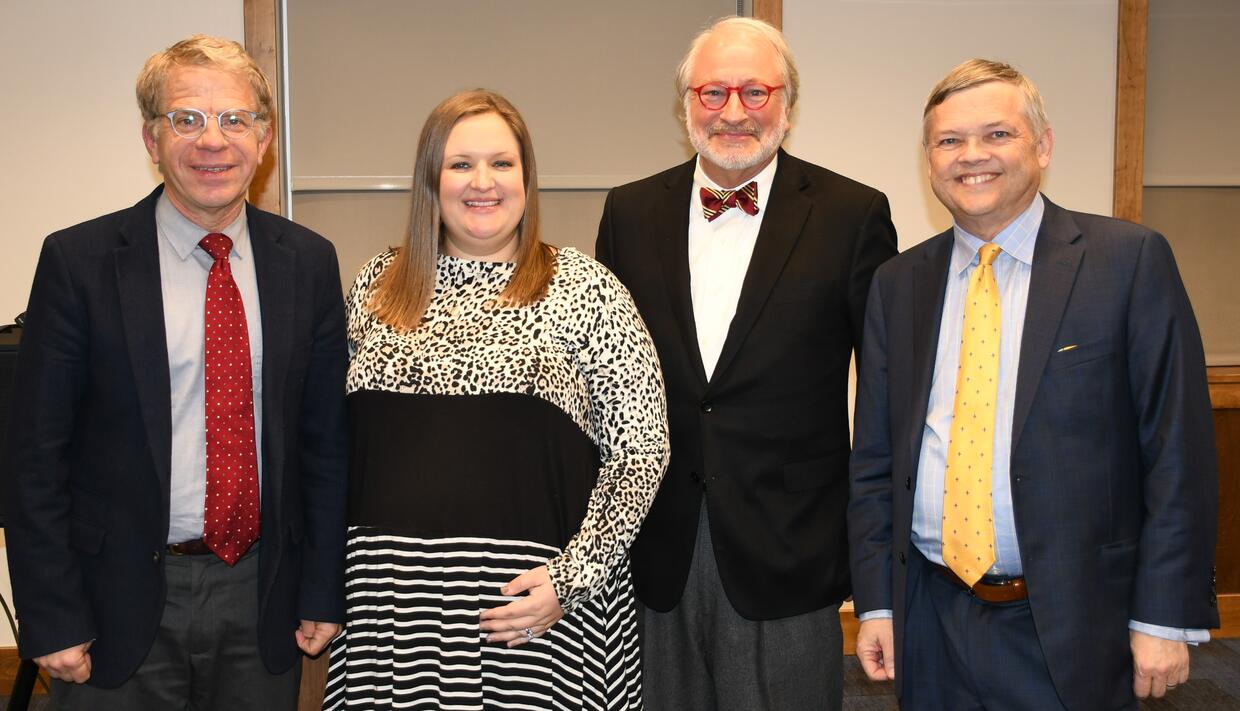 One of Limestone University’s academic programs will have a new name thanks to a recent generous donation in memory of one of its faithful alumni.

A reception was held on Monday, Nov. 29, at Limestone’s Hines & Riggins Center to celebrate the naming of the Margaret Poole Littlejohn English Education Program. Littlejohn graduated with Honors from Limestone in 1950 with a bachelor’s degree in English. She was elected as Limestone May Queen during her senior year.

Littlejohn served as a Limestone Life Trustee/Trustee Emeritus from 1975 until her death in 2013. She was named Alumna of the Year in 1979. She was awarded an Honorary Degree in Public Service from Limestone in 1995. Littlejohn was also named Philanthropist of the Year by Limestone in 2009.

An endowed scholarship for the English Education Program is also being established in her memory.

Including the most recent gift that was celebrated on Monday, the lifetime giving of Margaret Poole Littlejohn and the Broadus and Evelyn Littlejohn Foundation now totals $1 million.

“This a very monumental thing in higher ed,” said Limestone President Dr. Darrell Parker. “There is something about naming a program that is substantial. When I came to Limestone four years ago, it was really clear to me that this institution had a strong foundation. And over the years, I have been learning more about the people who helped build and provide that foundation. The Littlejohn family, particularly Margaret Poole Littlejohn, is certainly on that list of dedicated supporters.”

As part of that past dedication to Limestone, the Margaret Poole Littlejohn Scholarship Fund was established in 1974 by Broadus R. Littlejohn, Jr., in honor of his wife. The fund supports a scholarship for a Music major at the University.

Richard Littlejohn, the son of Margaret and Broadus, attended Monday’s reception, along with several other family members, including his niece, Ansley Gowan Warren, who was representing her mother Anne Littlejohn Gown who could not be in attendance. Also taking part in the reception was Marshall Winn, who serves with Richard and Anne as one of the three Littlejohn Foundation Trustees.

“My mother was an English teacher in South Carolina public schools for a number of years, and she was passionate about English Education,” Richard said. “As we were searching for an appropriate use of the foundation funds at Limestone, that was the are we identified because it is a very important issue for our local area and our culture. We wish Limestone and its English Education program the very best.”

Dr. Lucy Steele, an assistant professor of English and the Program Coordinator of English Education at Limestone, talked about the significance of the Littlejohn Foundation gift and how it would impact the program.

“We have already filled out the application to join the National Writing Project, which is a network of teachers, university faculty, researchers, writers, and community educators working to advance writing and the teaching of writing,” she explained. “This gift will provide the opportunity for Limestone to connect into that network of teachers. We are also looking to have a community development component with that, too. We would like to do summer campus for kids on campus to do writing activities and those types of things. It will give our pre-service teachers, as well as teachers in our community, a chance to be involved.

“This is an opportunity for English Education and for Limestone to really be a part of the community and do a lot of things locally,” she added. “We are very appreciative of this gift for our program.”

Every year, National Writing Project teachers lead programs where educators across the nation learn how to help youth research and form arguments, expand their learning beyond the classroom walls, and publish their writing about topics that matter to them. Through its local sites, the National Writing Project provides customized programming and services for teachers, for schools, and for youth and communities.

A native of Enoree, SC, Margaret Poole Littlejohn graduated from Laurens High School in 1945. After receiving her degree from Limestone, she taught high school English and French while serving in Greenwood, Orangeburg, Georgetown, and finally in Spartanburg where she married Broadus Richard Littlejohn, Jr. in 1956. From that time forward, she was a committed member of First Baptist Church of Spartanburg, being a choir member for 50 years in addition to her work in the Women's Missionary Union.

In addition to her service to her family, church, and college, she was involved in many aspects of her community, being a longtime member of the Cema Chreitzberg Garden Club, the Junior League, the Music Club of Spartanburg, Spartanburg Debutante Club, Mobile Meals Volunteer, and Board member of the Arts Council and Georgia Cleveland Nursing Home.

For many years, she supported her husband in the management of Community Cash Stores.

Limestone University President Dr. Darrell Parker (far right) is seen here with (left to right) Richard Littlejohn, Ansley Gowan Warren, and Marshall Winn during a reception at the Hines & Riggins Center on Monday, Nov. 29. Ansley’s mother, Ann Littlejohn Gowan, who could not be in attendance, serves on the Littlejohn Foundation Board along with Richard Littlejohn and Winn.