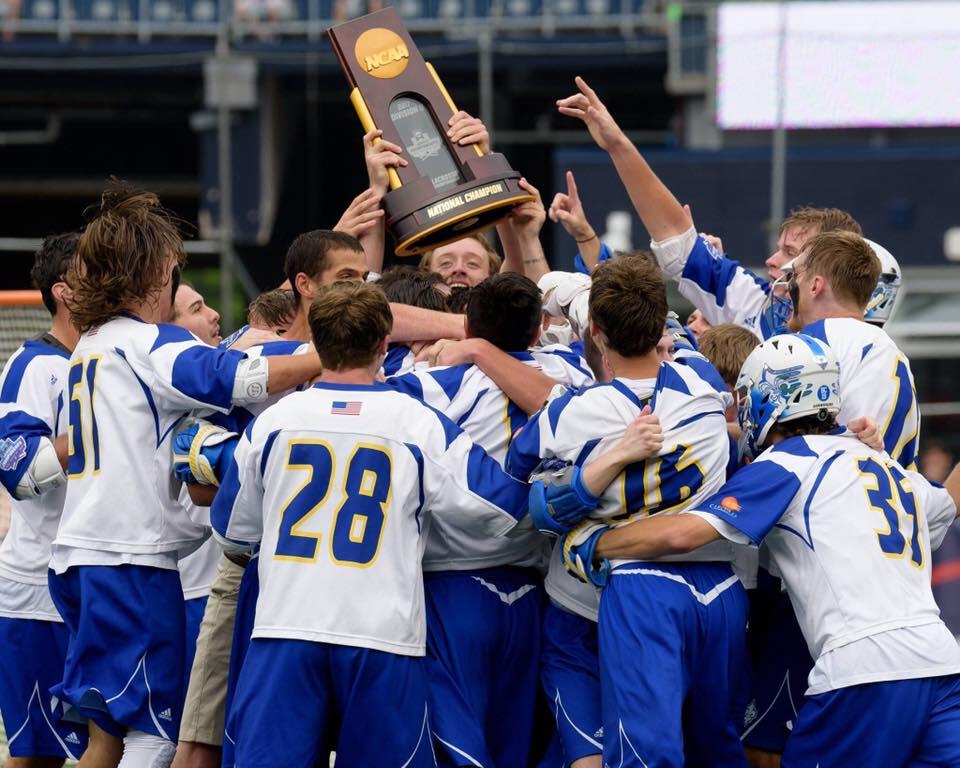 Looking up at a 6-4 deficit early in the second half, the nationally top-ranked Limestone College men's lacrosse team surged ahead with a 5-0 spurt, including three goals within a 17-second span, to clinch the program's third NCAA Division II National Championship over the last four years with an 11-9 decision over No. 4 Merrimack College on Sunday, May 28, at Gillette Stadium in Foxborough, Mass.

Senior Kevin Reisman (West Babylon, N.Y.) went 17-of-24 at the center "X" and added 14 groundballs and an assist to pick up tournament Most Outstanding Player honors

Junior keeper Cole Aikens (Novato, Calif.) was tremendous in between the pipes, especially in the second half – he finished with 13 saves overall, eight of which came over the final 30 minutes

Merrimack finished with a 40-36 advantage in shots attempted, but Limestone held a 41-29 margin in groundballs

Limestone's defense held strong on the Warriors first possession, fending off three shot attempts before Maciejewski put the Blue and Gold on top 1-0 with a long range connection on the resulting clear. He scored on an empty net from inside the faceoff circle, but Merrimack quickly tied the game with 12:31 left.

In a game that featured two high-powered offenses, it was the defensive units that created problems early on as both squads combined to force seven turnovers. The Saints capitalized off one of those turnovers as Clancy planted his 21st goal of the year, but the Warriors again responded with the quick equalizer.

Merrimack ended the first quarter with a one-goal lead, and then doubled up the Saints, 4-2, early in the second on an extra-man score with 11:01 remaining in the half. The Warriors would extend the scoring run to 3-0 as a goal by Kyle Stenberg pushed the margin to 5-2 with 4:41 left on the clock.

Limestone ended its scoring drought when sophomore Brian Huyghue (Halifax, Nova Scotia) finished off a nice feed from Maciejewski on the ensuing possession. The Saints would cut the advantage to one with 56 ticks remaining in the period as Maciejewski split the frame for the second time on the day.

The Warriors delivered the opening goal in the third, pulling ahead 6-4, but the Blue and Gold rattled off three quick scores within a 17-second span to take its first lead since late in the opening quarter. Watkinson started the spurt before goals by Sheehan and Maciejewski put Limestone back on top, 7-6.

The Saints continued the third-quarter surge as goals by Smith and freshman Tyler Papa (Manlius, N.Y.) pushed the string of unanswered scores to five straight. The run would prove to be the decisive blow as Limestone pulled ahead 9-6 at the end of the third – a lead it would not relinquish the rest of the way.

Playing in its first national championship game, Merrimack refused to go away as it responded with a man-up goal early in the fourth, cutting the margin to 9-7 with 12:21 showing on the Gillette Stadium video board. The Warriors would then add another just 41 seconds later to make it a one-score game.

That would be the closest things would get, however, as junior Ben Higgins (Hampstead, Md.) found the back of the net before Cornetta closed the scoring for Limestone at the 6:27-mark. Aikens surrendered one goal late, but made several tremendous saves down the stretch to preserve the 11-9 win.

In the regular season matchup just over a month ago, Merrimack used a 5-0 spurt before the half to tie the game and then eventually pulled away late in the contest. The roles were reversed this time around as the Saints rode the momentum of a 5-0 surge in the third quarter, and then used two goals in the fourth to put the contest out of reach.

Limestone wins its third national championship in four years, and its fifth title in program history

Prior to Reisman's MVP performance in the title game, he was drafted in the 2017 Major League Lacrosse Collegiate Draft – he was taken with the 44th overall pick by the Ohio Machine

He wraps up his career at Limestone with 1,324 faceoff wins, a .735 faceoff winning percentage, and 926 groundballs

Combined attendance for the Sunday's championship games was announced at 31,560

In his seven years at Limestone, he is 129-10 with three NCAA Division II National Championships

The Saints will travel back to Gaffney, S.C. with the 2017 NCAA Division II Men's Lacrosse National Championship trophy in hand. The Limestone College Athletics Department will hold a formal trophy presentation on Wednesday, May 31, at noon in the Dave and Nancy Riling Hall of Fame Room located at the Bob Campbell Field House.