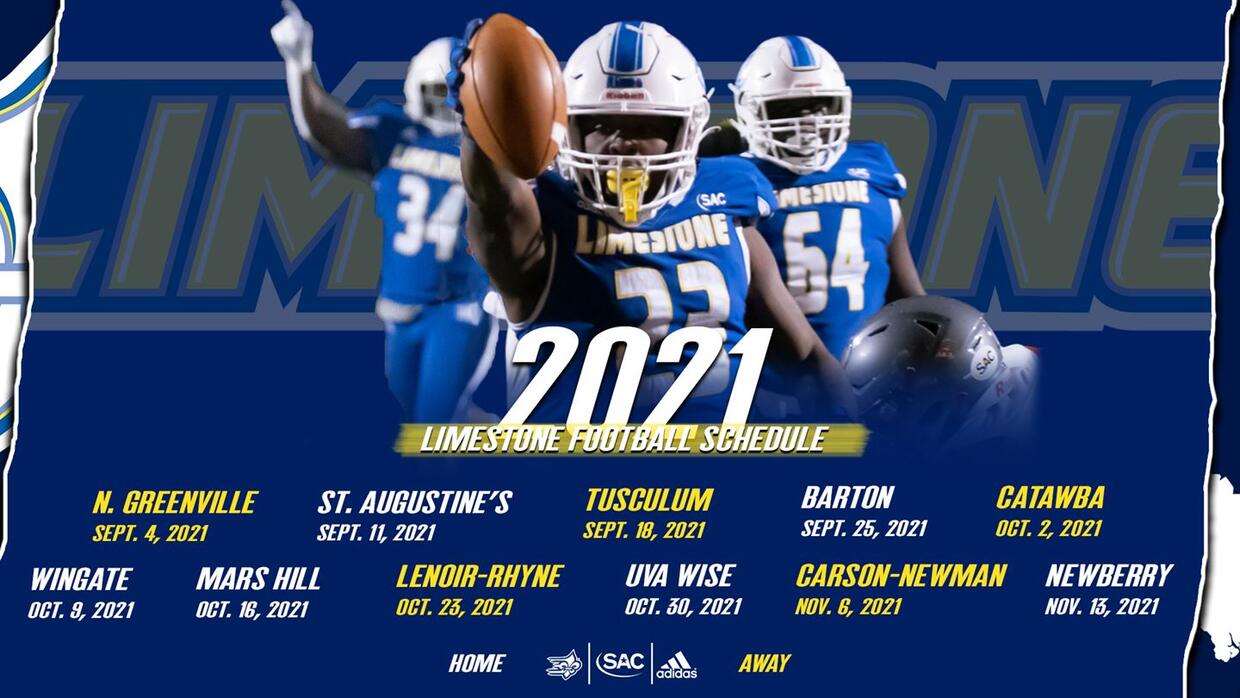 Entering the program's eighth season this fall, the schedule features consecutive non-conference matchups to open play before Limestone dives into conference action for the remaining nine games of the regular season.

Beginning with a trip to Tigerville, S.C. on Saturday, Sept. 4, the Saints will look to pick up their first win over North Greenville University in the fourth meeting all-time between the two teams and the first since 2017.

The Blue and Gold will then return to Gaffney the following Saturday, Sept. 11, for the team's home opener at Gaffney High School’s Reservation stadium against Saint Augustine's University at 7 p.m.

Limestone then opens SAC play with a challenging first test against Tusculum University, the defending conference champions, on Saturday, Sept. 18 at 1:30 p.m. in Greeneville, TN. After the Saints pulled out an overtime win over Tusculum in 2017, the Pioneers bounced back with three consecutive wins in the head-to-head series, the last of which came back on April 3 of the abbreviated 2020-21 campaign.

Limestone will play three of its next four contests at The Reservation, starting with the Homecoming game against Barton on Saturday, Sept. 25, at 7 p.m. Following a quick trip to Salisbury, NC on Oct. 2 to face Catawba College – a team Limestone beat handily, 52-24, in its last meeting in 2019 – the Saints will return to home to take on Wingate University on Oct. 9 at 1 p.m. and Mars Hill University on Oct. 16 at 4 p.m.

With four games remaining on the 11-game slate, the Blue and Gold will round out the month of October with a matchup at Lenoir-Rhyne University in Hickory, NC on Oct. 23, followed by a home contest with UVA-Wise on Oct. 30. Limestone is 1-4 all-time against Lenoir-Rhyne, which fell in the SAC championship game this past season. The Bears won the conference's regular season crown in 2019. Meanwhile, the Saints are a perfect 2-0 all-time against UVA-Wise, including a thrilling 30-24 victory over the Cavaliers last season in which senior running back Jerko'ya Patton scored a game-winning touchdown with four seconds remaining in regulation.

The Blue and Gold rounds out its road schedule the following Saturday when it sets out for Jefferson City, TN to face Carson-Newman University on Nov. 6 at 1 p.m. Limestone puts a wrap on the regular season when it closes out the home schedule against Newberry on Nov. 13 at 4 p.m. as the Saints aim for their first win over the Wolves since 2017.

Information regarding season tickets and individual game tickets will be made available by the Limestone Athletics Department on a later date.