Limestone Board Of Trustees Elect New Officers Of The Board; Riggins To Become New Chairman 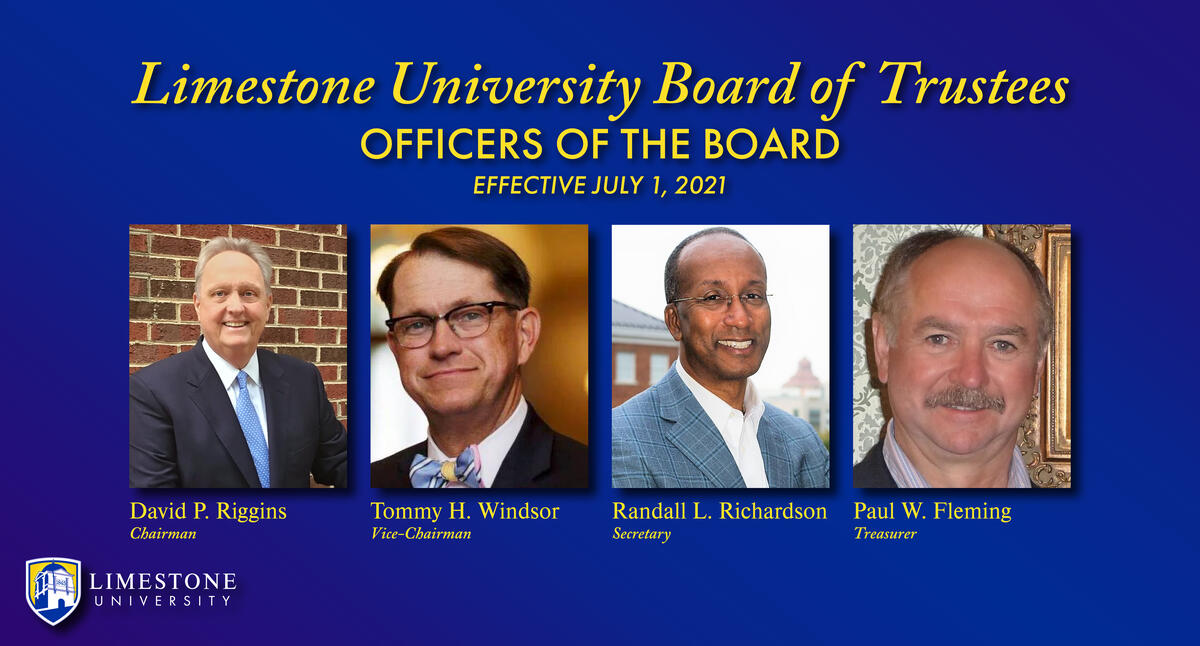 Board of Trustees Officers 2021

The Limestone University Board of Trustees recently elected its new officers for 2021-2022, including a new Chairman who is a native of Cherokee County and an alumnus of the institution.

David P. Riggins will begin his new duties as the Board’s Chairman on July 1. Additional officers elected by the Board at a recent meeting include Tommy H. Windsor, Vice-Chairman; Randall L. Richardson, Secretary; and Paul W. Fleming, Treasurer. All four were elected to serve two-year terms as officers of the Board of Trustees.

Now residing in Charlotte, Riggins graduated from Gaffney High School and is a member of Limestone’s Class of 1973. He is the President/Owner of D.P. Riggins & Associates, Inc., a Charlotte-based company that he founded in 1982. D.P. Riggins and Associates, Inc. has grown into a leading sales agency that specializes in custom metal and plastic component parts for Original Equipment Manufacturers.

Currently serving his fourth term as a member of the Board of Trustees and Vice Chairman, Riggins was selected in 2017 to Chair Limestone’s Presidential Search Committee. In May of 2018, he was awarded an honorary Doctor of Public Service degree from his alma mater.

During his time as a student at Limestone, Riggins was one of the driving forces behind the creation of intramural and club sports, clubs that soon evolved into men’s basketball and men’s golf as varsity-sponsored sports for the 1973-1974 seasons. He also played an important role in adopting the school’s official “Saints” nickname. Because of those accomplishments, Riggins was named a special inductee into the Limestone Athletics Hall of Fame in 2017. As a student, he was an active member of the Lambda Mu Sigma fraternity.

“I am humbled and honored to serve as the Chairman of the Limestone University Board of Trustees,” Riggins said. “I look forward to working closely with our President and his administration, my fellow Board members, the faculty, the staff, and students to advance Limestone into becoming one of the finest comprehensive universities in the state, the region, and the nation. The continued success of our students remains our highest priority.

“At the same time, we want to work in even greater collaboration with the City of Gaffney, Cherokee County, the Town of Blacksburg, and our local legislative delegation to make this a great place to live, work, and receive an excellent education,” he continued. “We want to bridge the gap between Limestone’s campus and the local downtown, both figuratively and literally. We want to do our part to get involved in initiatives to move our area forward, ranging from economic development to educating our local residents. For prospective students and all members of this community, Limestone has a lot to offer, and we want to make a difference in all of their lives.”

An advocate for underprivileged children, Riggins is heavily involved with Crossnore School & Children’s Home and “A Better World,” and served as a past Chairman of the Board for both organizations. Crossnore provides a safe and loving home where children receive an excellent education. “A Better World” is an after-school program in Charlotte that helps rebuild the future of children in broken communities. The program provides basic physical needs, individualized academic programs, and spiritual development.

“David has been instrumental in seeing Limestone through many changes and unprecedented growth,” said Limestone President Dr. Darrell Parker. “His leadership experience and commitment to the vision and success of Limestone will continue to move us significantly forward. As one of Limestone’s most passionate champions and a deeply committed alumnus and trustee, David is an outstanding selection for the next Chair of the Board of Trustees. I look forward to working with him in his expanded role and relying on his insight, counsel, and leadership to chart a course for Limestone’s continued excellence in higher education.”

Riggins replaces Randy Hines, who served as Limestone’s Board Chairman for the past four years. He most recent term on the Board expires on July 1.

“I pass the gavel to David with great confidence in his strategic skills, his years of service as a Trustee, and most of all, his steadfast commitment to Limestone,” Hines said. “I have no doubt that Limestone’s best days are ahead.”

Windsor, the new Vice Chairman of the Board, earned his Bachelor’s Degree online from Limestone and is the first alumni from that program to serve as a Trustee officer. Residing in Gilbert, Windsor is the Public Affairs Manager for the South Carolina State Accident Fund in Columbia. He previously served as the Director of Boards and Commissions for the South Carolina Governor’s Office. Windsor is also a football official with the S.C. High School League. He was elected in 2018 to fill an unexpired term on the Limestone Board of Trustees.

Richardson, who resides in Asheville, is an accomplished, healthcare executive with extensive experience at negotiating successful long-range growth strategies and aligning resources to achieve aggressive goals. Most recently, he was the Director, Healthcare Vertical Market, for Honeywell International. Before he was recruited to Honeywell, Richardson co-founded Alpha Healthcare Solutions (AHS) with two physician partners. He is a graduate from Montreat College, where he earned a Bachelor’s degree in Business Administration. He is also a graduate from Duke University’s Fuqua School of Business, where he earned a Master’s degree in Business Administration. He is Fellow at The American College of Healthcare Executives. Richardson was elected to his second term on the Limestone Board of Trustees in 2019.

The Board of Trustees also elected five new members recently to begin five-year terms, beginning on July 1. Information on those new Board members will be released soon. The Board of Trustees has fiduciary responsibility for the governance of Limestone University, serving to oversee and shape its broad policies. Limestone's President is responsible for the implementation of the University's policies.