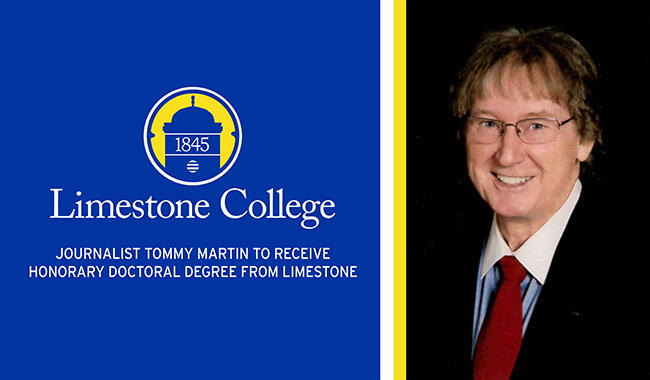 Local journalist and former Board of Trustees member Tommy E. Martin will be recognized with an honorary Doctorial degree during one of Limestone College’s upcoming graduation ceremonies.

Limestone’s Board of Trustees recently voted unanimously to bestow the Honorary Doctor of Public Service degree upon Martin during the first of two ceremonies planned inside Fullerton Auditorium on Saturday, Dec. 14.

Limestone College will confer degrees on its graduates from various degree programs during its two commencement exercises inside Fullerton Auditorium. Martin will receive his honorary degree during the 10:30 a.m. ceremony. There will be another graduation starting at 2 p.m.

The Publisher/Editor of The Cherokee Chronicle for the past 28 years, Martin attended the University of South Carolina and Limestone College. The son of William (“Bill”) and Edith Martin, he started in the newspaper business as a reporter/photographer in the spring of 1965. Since that time, he has worked for The Savannah Morning News, The Spartanburg Herald-Journal, and served two stints with The Gaffney Ledger. In 1991, he founded The Cherokee Chronicle, which is a bi-weekly newspaper that serves Gaffney and Cherokee County.

Martin has won numerous local, state, and national awards over the past 54 years, and has been recognized by the South Carolina Press Association, the Associated Press, and many other organizations.

“The impact that Tommy Martin has had on Limestone College over a period of nearly six decades is immeasurable,” said Randy Hines, the Chairman of the Limestone Board of Trustees. “Throughout his career, he has helped to shine a positive light on the College. He has led his profession by example and with integrity. Tommy is an ideal model to demonstrate to our students how someone can make their work meaningful in their community and in the world.

“As a friend, and then as a Trustee at the College, Tommy has been instrumental in leading several initiatives to make Limestone a better place for its students, faculty, staff, and the local community,” Hines continued. “We are grateful for his long-time dedication to the College. By granting this honorary degree, Limestone is demonstrating its commitment to honoring leaders who use their talents, expertise, and platforms to give voice to important matters and demonstrate the principles our College seeks to exemplify.”

The Gaffney native has authored three books, including Son Of A Peach: Darn Near True Tales From The World’s Largest Fruit, which is composed of a set of essays that portray small-town life with warmth and humor.

He also wrote I Will Kill Again: The Gaffney Strangler Story, which provides a behind-the-scenes look into events surrounding a real-life serial killer in Cherokee County in the 1960s.

Martin is married to his wife, Ann, and he has three children, including sons Jon and Josh, and daughter Tiffany Eubanks.