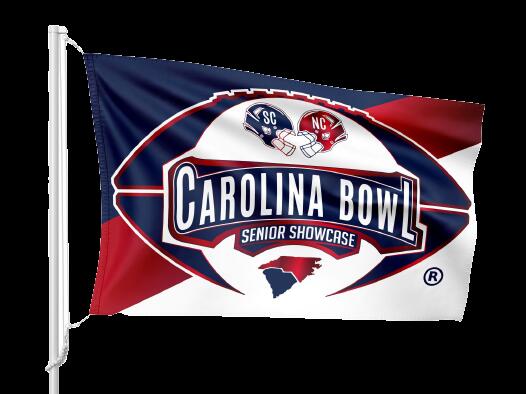 The Carolina Bowl Senior Showcase date has been changed to Sunday, Dec. 12, at Gaffney High’s “Reservation” stadium. The kickoff has been set for 4 p.m.

According to Todd Helms, one of the game’s organizers, the date was moved from Saturday, Dec. 11, in cooperation with the Touchstone Energy Cooperatives North-South All-Star Game so that college coaches will be able to attend both games.

“We are really excited about some Sunday football at The Reservation, showcasing some of the best high school football talent in both South and North Carolina,” Helms said. “In discussions with officials from the North-South Game, we decided it was in the best interests of everyone involved to move our game to Sunday. With this move, it will make things easier on the high school coaches and fans who have players participating in both games. And even more importantly, it will enable the college football coaches to make it to both games where they will be able to discover some amazing talent that can play on the next level.”

The Touchstone Energy Cooperatives North-South All-Star Game, that will be played at Doug Shaw Memorial Stadium in Myrtle Beach, features high school football standouts from the Palmetto State. The Carolina Bowl Senior Showcase, much like the Shrine Bowl, will include players from both Carolinas.

“The Shrine Bowl of the Carolinas announced its rosters earlier this year, but those players will not get to compete in an actual Shrine Bowl game,” Helms said at the announcement earlier this month. “We have been looking to get our Senior Showcase off the ground for some time, but with the second straight Shrine Bowl cancellation, we felt the time was now. We have a short window of time to get it done, but we’re excited about giving these high school players from South Carolina and North Carolina an opportunity to compete and to show their talents to college coaches across the area. We’re looking forward to a great event at an incredible venue in Gaffney.”

The Carolina Bowl, headed by a non-profit organization, was originally formed by Jimmy Staton as an all-star football game for middle school players. That game started out being played prior to the Shrine Bowl of the Carolinas and then became a stand-alone contest in Durham, NC. The inaugural Carolina Bowl Senior Showcase kicks off in Gaffney on December 12, and Staton said his group intends for the game to stay in Cherokee County for many years to come – even after the Shrine Bowl of the Carolinas resumes in the future.

Former Spartanburg and Woodruff High head football coach Freddie Brown also serves as one of the Carolina Bowl officials and he will be particularly involved in the player selection process for the Senior Showcase. Brown said that he believes some of the players originally picked for the Shrine Bowl of the Carolinas will be on the rosters for the game in Gaffney. The two teams are expected to have 44 players each.

“There are so many excellent high school football players in South and North Carolina who deserve a chance to take part in a post-season all-star game like this,” Brown noted. “For us, it’s about providing that opportunity for them to make themselves known to college coaches.”

The list of participating coaches and players, as well as ticket details for the Carolina Bowl Senior Showcase, will be announced soon. A Cherokee County recreation league contest will be played at The Reservation prior to the game.

Practices for the Carolina Bowl Senior Showcase will be held at Jerry Richardson Field on the campus of Limestone University in Gaffney and at Blacksburg High School. The South Carolina and North Carolina squads will practice at each facility once a day.

For more information on the game or to obtain sponsorship information, Helms can be reached at (828) 335-1001.