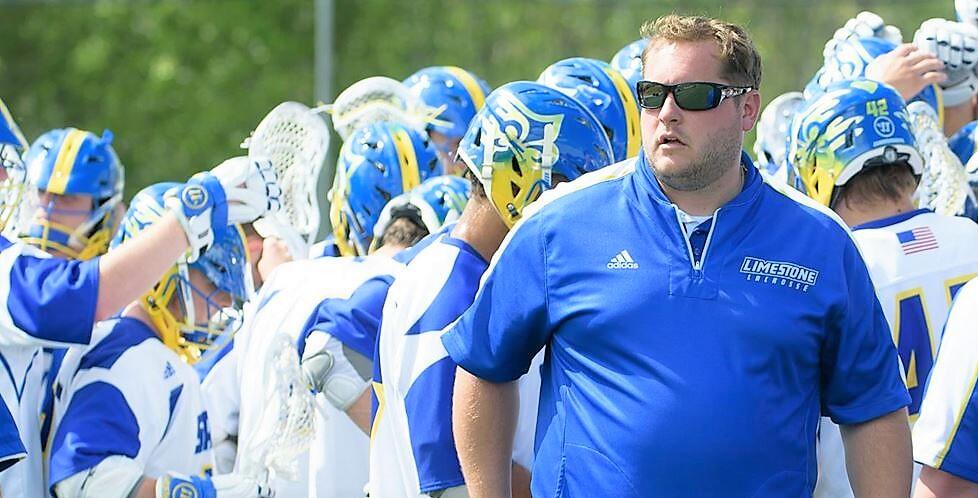 Limestone University has announced that Brendan Storrier, a former All-American standout with the Saints and a two-time national Assistant Coach of the Year who helped the program win three NCAA National Championships, has returned to his alma mater as the head men’s lacrosse coach.

Storrier, who served as the head coach at Mars Hill University the past three years, spent eight seasons as an assistant coach with the Saints during a dominating run that featured three NCAA Division II National Championships (2014, 2015, 2017) and five national title game appearances overall. He was Limestone’s recruiting coordinator starting in 2011 before taking the offensive coordinator role in 2014.

He becomes the sixth full-time head coach in the program’s 32-year history and will be the first alum of the program to head the Limestone lacrosse team. Storrier was a two-year standout with the Saints in 2008 and 2009, earning Conference Carolinas Player of the Year and All-American honors in 2008.

“We are so happy to welcome Coach Storrier back to Limestone as our new head coach,” said Vice President of Intercollegiate Athletics Mike Cerino, who coached Storrier as a player. “He already had a proven track record as one of the nation’s top assistant coaches while helping to lead our program to three national titles, and only matured into an up-and-coming head coach during his time at Mars Hill.”

Storrier had been in the process of rebuilding the Mars Hill men’s lacrosse program over the past three years, although most of the 2020 campaign was canceled and the 2021 season was shortened due to the COVID-19 pandemic. He still managed to double the size of the roster during his tenure with the Lions while coaching a pair of All-South Atlantic Conference selections and a SAC Elite 20 Award winner.

As the offensive architect during Limestone’s dominating run over the eight-year stretch, the Saints led the nation in scoring with 16.09 goals per game, 384 total points, and 23.09 points per game while finishing second with 154 assists and a scoring margin of 8.14 goals per game during the 2017 campaign.

The Limestone offense set numerous NCAA Division II records in 2016 with 21 wins, 664 points, 424 goals, and 240 assists – the Blue and Gold led all three NCAA divisions in total points that season. Mike Messenger thrived in Storrier’s offensive system as he was named the Lt. Raymond J. Enners Award winner as the Most Outstanding Player in 2016 and the Lt. J.G. Donald MacLaughlin, Jr. Award as the Most Outstanding Midfielder. Kyle Rhatigan, one of eight All-Americans on the 2016 national runner-up team, became only the second player in program history to register 100 points in a single season.

The Saints, who also led the nation in scoring offense en route to a national championship in 2015, featured three straight Lt. Raymond J. Enners Award winners in 2015, 2016, and 2017. In addition to mentoring a total of 42 All-Americans during his first tenure with the Blue and Gold, Limestone players also combined for three NCAA Elite 89/90 Awards with the highest overall GPA at the championship site.

Storrier was named the Division II Assistant Coach of the Year twice by the Intercollegiate Men’s Lacrosse Coaches Association (IMLCA) after coming off national championships in 2014 and 2017.

He spent two seasons as a student-athlete with the Saints, posting 44 goals and 33 assists during his junior season in 2008 before adding 34 goals and 18 assists as a senior. Storrier won a National Junior College Athletic Association (NJCAA) National Championship as a freshman in 2006 and earned All-American honors during both years at Onondaga Community College. He was inducted into he NJCAA Men’s Lacrosse Hall of Fame shortly after winning a third national championship with Limestone in 2017.

“My family and I are very excited to be back at Limestone,” Storrier said. “I want to thank President Dr. Darrell Parker, Coach Cerino, and Coach Curt Lamb and the rest of the search committee for choosing me to be the head men’s lacrosse coach at Limestone University. It is an honor to lead this storied program, and I look forward to working with the coaching staff, including Coach Kevin Reisman, and all of our student-athletes in our pursuit of excellence in the classroom, in the community, and on the field.

“Limestone is a special place to me,” he continued. “I have seen the positive changes under Dr. Parker’s leadership from afar the last three years and I am very excited to be a part of this new chapter at Limestone. The opportunity to work for my college coach Mike Cerino and lead the program that he started was an opportunity that I could not pass up.”

Storrier graduated from Limestone in 2010 with a Bachelor’s of Science degree in Sport Management.