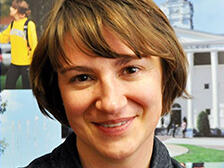 Limestone College Professor of English Erin Pushman will have her blog, “The Face of Bravery,” published in MUTHA magazine as an ongoing series.

After publishing one of Pushman’s essays, an editor from MUTHA magazine read Pushman’s blog and requested to publish select posts in a serial series. The series began in October, and the fourth installment is up now on MUTHA.

With “The Face of Bravery,” Pushman chronicles her daughter’s life with a disfiguring disease.

“MUTHA is a magazine I was reading before I submitted my own work to them,” Pushman said. “It's a magazine that is shifting the ways we write about mothering, and I'm enthusiastic about having an ongoing relationship with this publication.”

MUTHA magazine explores real-life motherhood, from every angle, at every stage.

In October 2018, eight months into her daughter's fight against a rare and aggressive tumor, Pushman began the blog and had no idea that the tumor would alter her life in ways she never could have imagined before the diagnosis.

The process of preparing blog posts for publication in MUTHA has meant a lot of revision work for Pushman. She explains, “I often tell my students we have to change the way we write depending on the kind of document we are writing. A blog post is a different kind of writing than an essay for a magazine. So, each time a deadline for MUTHA approaches, I find myself furiously revising blog posts to make them work as essays.”

Pushman is a member of the standing committee for the Conference on College Composition & Communication (CCCC) Creative Nonfiction Special Interest Group.

Her writing has appeared in 1966: A Journal of Creative Nonfiction, the Gettysburg Review, Breastfeeding Today, Cold Mountain Review, More New Monologues for Women by Women II, Boomtown, and elsewhere. She is the recipient of a 2017 North Carolina Regional Artist Project Grant and is the current chair of the Donald Murray Prize in Creative Nonfiction from the Conference of College Composition and Communication.

The blog can be found at www.thefaceofbravery.wordpress.com.