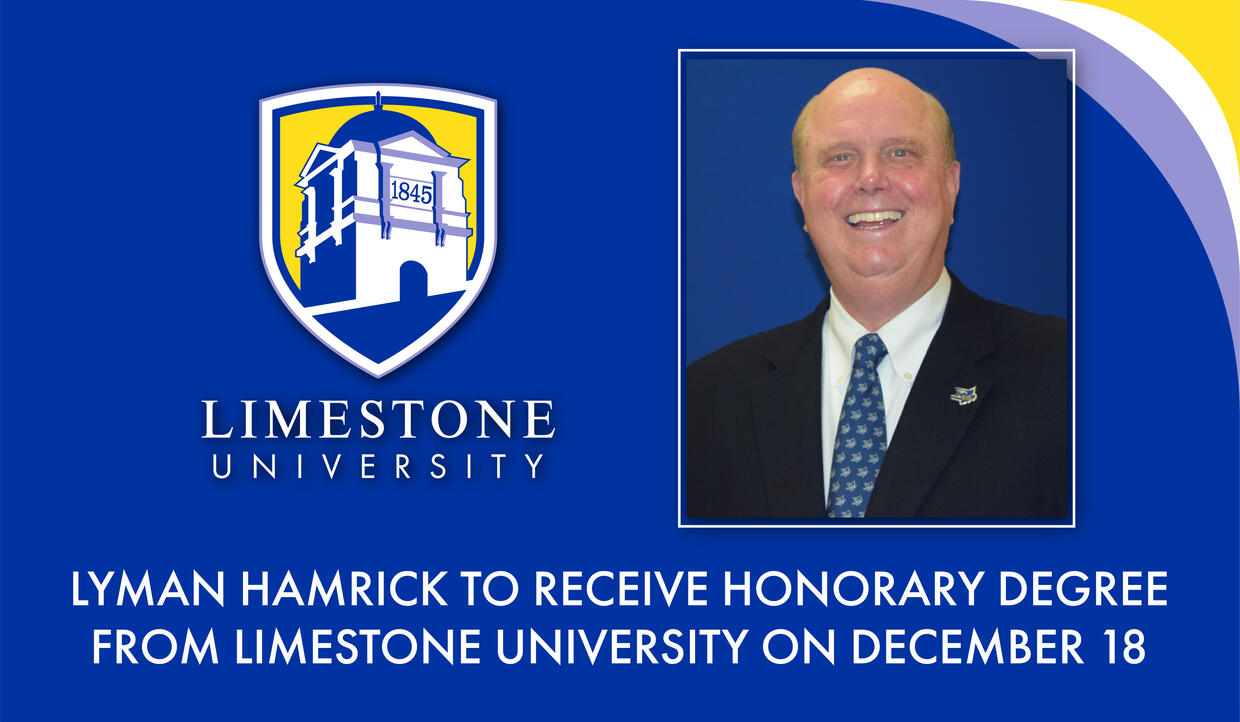 Local businessman, long-time Limestone Board of Trustees member, and generous supporter Lyman W. Hamrick will be the commencement speaker at the University’s upcoming graduation ceremony on Saturday, Dec. 18, where he will also receive an honorary Doctor of Public Service degree.

For Hamrick, his honorary degree will come 20 years after his father received the same recognition from Limestone for his exemplary service to the institution.

Limestone will confer degrees for 252 graduates from its various programs during the 2 p.m. commencement at Gaffney High School’s stadium.

The Board of Trustees voted unanimously earlier this year to bestow the honorary Doctor of Public Service degree upon Hamrick, who will complete his third term on the Board in June of 2022.

Hamrick, a former Chair of the Limestone Board of Trustees, currently serves on the Board of Directors for Hamrick Mills, Inc. A native of Gaffney and graduate of Spartanburg Day School, he is a member of the Presbyterian College Class of 1973.

He and his wife, Lee, have two children, Elliott Hamrick and Sarah Hamrick Grice, and one grandchild.

Upon the recommendation of the President or a member of the Board, Limestone Trustees may confer honorary degrees in recognition of distinguished achievement, leadership, or service that exemplifies the University’s mission and core values.

The Hamrick family has long been involved at Limestone, with many members of the family serving on the Board of Trustees.

“It just comes natural to me to want to be of service to Limestone, because Limestone is so important to the community,” Hamrick said. “By serving one, I actually have the opportunity to serve both. I really got my indoctrination about the importance of Limestone from my father, Wylie, who served the college for many years. My dad would always remind me about how this place touched our lives outside of the campus – in our churches, in our schools, and across the community.

“If you just look around Gaffney, you can see the influence of the faculty, the staff, and the students,” he continued. “That’s why our family supports Limestone. That is why so many members of my family have served on the Board of Trustees over the years. I am tremendously honored to receive an honorary degree from a place that is so dear to my heart and the heart of my entire family. I am humbled to be following in the footsteps of my late father, who was also presented with an honorary degree from Limestone. I am also extremely excited to have the privilege speak to the Class of 2021 during the commencement address.”

Hamrick has been a member of the Rotary Club of Gaffney for 48 years, and he has served as a Sunday School teacher at Gaffney’s First Baptist Church for many years.

Dr. Wiley Cicero Hamrick, Lyman’s great grandfather, founded a new textile company in January of 1900 that is now known as Hamrick Mills, Inc. While Hamrick had been a benefactor of Limestone for a number of years, including his service on the Board of Trustees, his most noted and visible contribution was the Hamrick Hall of Science, which was completed in 1925. The facility, listed on the National Register of Historic Places, still stands as a cornerstone of academics at Limestone. Hamrick also gave a significant boost to the college’s endowment fund 1927.

He served as a member of the Board of Trustees from 1899 until his death in 1935 and oversaw Limestone during its golden years of expansion. Though engaged in ventures in textiles, agriculture, and local and state politics, Hamrick was never too busy to devote his time and energy to the affairs of Limestone. His descendants have played prominent leadership roles at Limestone through the present day.

Lyman Hamrick’s father, Wylie L. Hamrick, served for nearly 30 years as a member of the Limestone Board of Trustees. At the time of his death in 2012, the former Board Chair was a Trustee Emeritus. He was named Limestone’s “Philanthropist of the Year” in 2000. He was named an Honorary Alumnus of Limestone in 2008, and he received his Honorary Doctor of Public Service degree from Limestone in 2001.

For a complete timeline of the Hamrick family’s contributions to Limestone, please click HERE.

“The legacy of the Hamrick family can be found all across our campus and our community,” said the University’s President Dr. Darrell Parker. “Lyman Hamrick certainly has earned his own chapter in the story of the role that the Hamrick family has played in the success and growth of Limestone. We are immensely honored to have Lyman speaking to our graduates, and it will be a privilege to bestow upon him his honorary Doctor of Public Service degree that he has undeniably earned for his contributions to Limestone over the years.”

Limestone’s graduation on December 18 from the Gaffney High School stadium will also be live-streamed so family and friends unable to be in attendance can view the ceremony. The live-stream link will be available HERE.