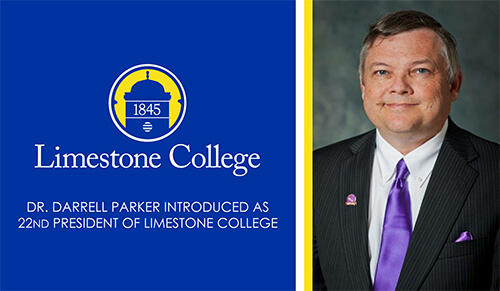 After an extensive national search for over seven months, Dr. Darrell Franklin Parker was introduced on Wednesday, December 6, as the next President of Limestone College.

The announcement came during a news conference held inside Stephenson Dining Hall on campus.

Dr. Walt Griffin, who has led Limestone College since 1992, announced earlier this year that he would be retiring at the end of the fall semester that concludes with graduation ceremonies December 14-16.

Dr. Parker has been serving since 2012 as the Dean and Professor of Economics for the College of Business at Western Carolina University.

A native of Buncombe County, Dr. Parker grew up in Weaverville, North Carolina and graduated from North Buncombe High School. He received his bachelor’s degree in mathematics and economics at the University of North Carolina Asheville before going on to earn his master’s and doctoral degrees in economics from Purdue University.

Dr. Parker is no stranger to the Upstate area of South Carolina. He served for six years as the Dean and Professor of Economics for the Johnson College of Business and Economics at the University of South Carolina Upstate in Spartanburg.

From 2001 until 2006, Dr. Parker was at Georgia Southern University where he served numerous roles, including Professor of Economics, Director of the Center for Economic Education, Acting Associate Dean, and Director of the School of Economic Development in the College of Business Administration.

From 1990 until 2001, he served as director of the Winthrop Economic Development Center, which he founded.

The search for Limestone’s next President started in April with the formation of a 13-member Presidential Search Committee, led by Board of Trustees Vice-Chairman David Riggins.

“From the beginning, we were confident we would find a motivated, enthusiastic leader to build upon Limestone’s legacy,” Riggins said. “We were seeking a President who could build upon Dr. Griffin’s achievements and lead us to an even brighter future. We firmly believe we have found that person in Dr. Darrell Parker.”

The committee conducted a comprehensive national search for the successor to Dr. Griffin. The list of candidates was narrowed down to three finalists who recently visited with Limestone constituents on campus.

The full Board of Trustees voted on the next President during a called meeting on Tuesday, December 5.

“Limestone will be forever defined by Dr. Griffin’s tenure and guidance, and his contributions to our College will benefit generations to come,” said Randy Hines, Chairman of the Board. “We are excited about the future of Limestone College and the leadership that Dr. Parker will bring for the benefit of our students and the communities of Gaffney and Cherokee County.”

In addition to its traditional Day Program campus in Gaffney, Limestone has an Online & Evening Program that includes online courses and evening classes at six sites across South Carolina, including Aiken, Charleston, Columbia, Florence, Gaffney, and Greenville.