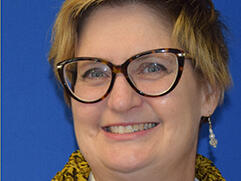 Guffey’s presentation centered on the commonalities between the Hulu television production of Margaret Atwood’s The Handmaid’s Tale and its recent sequel, The Testaments, and Joss Whedon’s series Dollhouse. Among the issues she raised and discussed in the presentation were the roles of authority and legality in both dystopian societies.

Despite the name, the SWPACA is considered more of an international conference than a regional one. Attendees traveled to Albuquerque from 20 countries and, over a four-day span, presented on an array of topics centering on popular culture, which is America’s largest dollar-for-dollar export. The conference is also known for its strong focus on pedagogy.

The mission of the SWPACA is to provide an outlet for scholars, writers, and others interested in popular/American culture to share ideas in a professional atmosphere, and to increase awareness and improve public perceptions of America’s cultural traditions and diverse populations.

Joining the Limestone faculty in 2018, Guffey teaches at both the undergraduate and graduate levels. She has also taught several communication courses, such as Introduction To Communication, and Interpersonal and Public Speaking. Guffey also has the credentials to teach drama and film.

Her research and writing revolve around contemporary Quality Television. She has published and presented on Joss Wheldon’s work and is the co-author of companion guides to both Breaking Bad (2014) and Babylon 5 (2017).